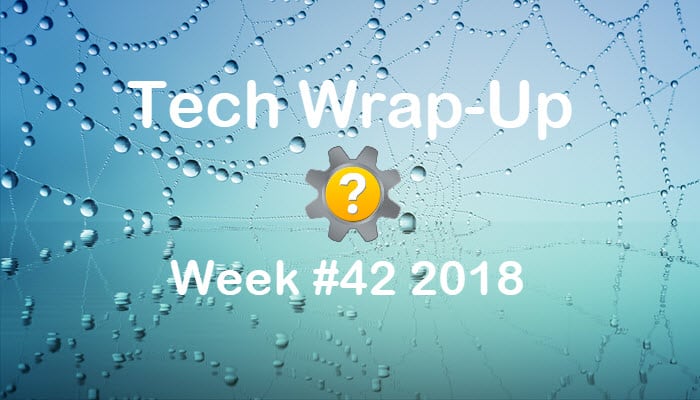 Tech Wrap-Up Week 42 2018. A look back at this week’s ten most engaging stories from the Tech Help Knowledgebase social media feeds. We order the story summaries below by user engagement (posts with the most likes, shares, clicks, hashtag clicks and detail expands) and by the number of impressions they received. Stories are in descending order with the most engaging story at the top. Our human-curated social media feeds include links to technology news, how-to and help articles, and video tutorials for common issues.

Stories curated for our feeds are from our staff writers or culled from third-party sources that produce content related to the categories covered by our site. See the summaries and links below for the week’s top stories by user engagement. Follow us on Twitter, Facebook, Google+ and YouTube to interact with our feeds.

1. How can we ensure our tech isn’t spying on us? (ITProPortal)

Cookies are notorious for keeping tabs on our internet surfing. But other means are available for tracking your usage too, like cached content, web storage, and browser fingerprinting. ITProPortal offers some suggestions on how to prevent technology from spying on you. Among them are don’t give access to your personal data to untrusted resources, don’t install applications you don’t trust, and use private browsing but don’t sign into sites that way. Using common sense when it comes to protecting your privacy goes a long way.

Progressive Web Apps (PWAs) are websites that Windows 10 users download as apps from the Microsoft Store. Users launch PWAs from common app areas like their desktop, Start menu, and Action Center. Google released Chrome 70 yesterday with support for PWAs. In much the same fashion, PWAs that run in Chrome utilize native features. Not many PWAs exist yet for Chrome, but app development should ramp up in the near future.

The world’s most popular web browser is Google Chrome. The most reviled plugin is Java (JRE), the bane of network security administrators everywhere. Yet, some need still exists to run legacy Java apps. When that need arises, Chrome is an option even though Google killed NPAPI support in Chrome 3 years ago. Java support in Google Chrome requires a free and simple intermediary to run Internet Explorer’s rendering engine within the Chrome wrapper.

4. Google, grow up: Drop the Apple-like arrogance or Chrome OS will fail (ZDNet)

Apple is entitled to a level of arrogance since it has 12 years of experience with iOS on iPhone (and 8 years on iPad). It has an established ecosystem and strong in-app revenues. Outside of Google, material design has not been broadly adopted by outside developers. Even Microsoft has its own material design language of sorts — Fluent Design. This article asserts that if Google doesn’t find a seamless way for Androids apps to run on Chrome OS that Chrome OS will fail.

5. Google is delaying a change that will break old web games — again (The Verge)

Chrome 66, released this past May, had unexpected consequences. A new feature included with the browser automatically muted sites that played sounds. For many, blocking sound from auto-play videos by default was a gift from above. But it also blocked sound from some popular online games. Google eventually rolled back the change in games and web apps and deferred it to a future update. That update is Chrome 71 due for release in December.

Microsoft issued a quality improvement release for Windows 10 Creators Update (1703) today. The update is not known to contain security fixes since those are normally included as part of regular Patch Tuesday updates. Although the changelog is lengthy, the article calls out that the update fixes an issue known to exist on systems with more than 4GB of memory in particular.

7. Civil, a blockchain-media startup, cancels its ICO, offering a full refund to those who bought tokens (Fortune Magazine)

Blockchain start-up, Civil, envisioned a new world for journalism that combined a publishing tool for journalists with a direct funding resource in readers. An ERC-20 token by the same name (symbol CVL) was to serve as the intermediary between readers and content. After coming up very short in their token sale, Civil announced Tuesday its cancellation of the sale and a full refund of contributions. According to Civil, all is not lost because, “a new, much simpler token sale is in the works.”

8. What developers say Apple needs to do to make the AppleTV a gaming console (Ars Technica)

The Apple TV 4K lets users watch their content in 4K HDR, and reckons to be the gaming console Apple needs for its ecosystem. However, on September 24, Apple stopped support for Microsoft-owned Minecraft. Lack of availability on Apple TV 4K is troubling because Minecraft is still available on many other non-Microsoft platforms including PlayStation. The article dives into whether Apple pulled Minecraft for lack of success on tvOS, or for other reasons.

9. Microsoft’s amazing alternative to Apple’s MacBook just got even better with the Surface Laptop 2 (Business Insider)

Microsoft’s Surface Laptop is more or less a solid gimmick-free laptop, unlike its other Surface counterparts. The Surface Laptop 2 had a Tuesday release date with a starting price of $999. Its unusual fabric-covered keyboard is a remnant from the original model, and it does not have a USB-C port. Don’t expect to run games on it, but its specifications make normal activity a cinch. Compared to the latest MacBook Pro, the keyboard, trackpad, and battery life all seem better — plus it has a touchscreen.

Google released Chrome 70 today for Windows, Mac, and Linux as part of its regular monthly release cycle. Along with 23 security fixes, Chrome 70 has some notable new features. Among them are Allow Chrome sign-in, an updated “not secure” warning, website access to Touch ID, AV1 codec to improve video streaming, and support for Progressive Web Apps on Windows.

Thank you for visiting Tech Help Knowledgebase to read the Tech Wrap-Up Week 42 2018. If you liked this article, follow us on Twitter @techhelpkb and subscribe to our YouTube channel to keep in the loop.