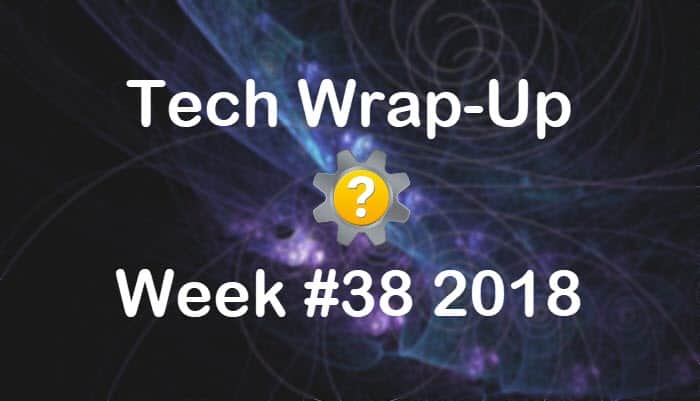 Tech Wrap-Up Week 38 2018. A look back at this week’s most engaging stories from the Tech Help Knowledgebase social media feeds. We order the story summaries below by user engagement (posts with the most likes, shares, clicks, hashtag clicks and detail expands) and by the number of impressions they received. Stories are in descending order with the most engaging story at the top. Our human-curated social media feeds include links to technology news, how-to and help articles, and video tutorials for common issues.

1. Five security and privacy settings in iOS 12 you should change right now (TechCrunch)

Released earlier today, iOS 12 packs some new security and privacy punch. TechCrunch recommends iOS device users take some initiative to explore them. The first setting to change is USB Restricted mode, followed by turning on automatic updates. Next, set a stronger password for the device itself, and turn on two-factor authentication. Last but not least it taking advantage of iOS 12’s new password manager to review reused passwords. Read the article to learn about locating each setting.

2. How to use Apple’s new Screen Time and App Limits features in iOS 12 (The Verge)

Have you ever wondered how much time you  spend on each iPhone or iPad app? How about how many times you check your phone or the volume of notifications you receive? The iOS 12 Screen Time app is chock full of useful data intended to help you answer those questions and curtail smartphone overload. Its weekly summary serves as a guide to set App Limits if needed for you or family members. The new Downtime app is useful to configure time away from all apps except ones you may choose to whitelist. Apple giveth and Apple taketh away. The roses smell good today.

It was going to be one of those days. Lots of software updates yield lots of support inquiries. macOS Sierra and High Sierra users could upgrade to Safari 12 starting yesterday. Some upgraded users who run legacy Java clients for their jobs, like a VPN client from Jupiter, or Oracle EBS, knew something was different right away. At the base of the list of new Safari 12 features was one sentence about the removal of legacy NPAPI plug-ins. Firefox ESR might save the day, at least for a while.

4. What Happened to Conversation Details in iOS 12 Messages? (Tek Revue)

Sometimes phone OS updates add an unexpected learning curve. iOS 12 is no different. In one case, Apple relocated a handy Messages app feature which is better than removing it altogether. It’s the little “i” for info button that allows you to see conversation details. Previously available at a single tap in the top-right corner of a conversation, in now takes two taps to get there.

When Kim talks, we listen like you (well, listen to Jessica over at Komando.com). Listed are five money-saving Chrome extensions: Honey, InvisibleHand, Keepa, Ebates, and Piggy. Learn how each extension works and how they can save you money while surfing.

6. Android 9 Pie is now rolling out to all OnePlus 6 owners with final, stable build (9to5Google)

OnePlus is a smartphone manufacturer out of Shenzhen, China. Following an open beta program that launched on September 3, OnePlus 6 owners today have access to the final Oxygen OS 9.0 release. Oxygen OS is OnePlus’s customized Android operating system. The version number convention of this build now matches the Android convention. Oxygen OS 9.0 is the OnePlus custom version of Android 9 Pie. Note that it is a staged rollout, and all OnePlus 6 users should receive the upgrade over the next few days.

7. How to Use the New Augmented Reality Measure App in iOS 12 (Mac Rumors)

Measure is the name of a new augmented reality app from Apple included with iOS 12. Use the app to gauge the size of objects in the real world in place of using a tape measure. Measure allows you to make multiple measurements, measure rectangular objects, and save those measurements for later reference. The app also includes a Level feature for straightening vertical and flat objects. It may be more useful than the flashlight app.

8. OnePlus is making its foray into the TV segment with the OnePlus TV (Android Central)

OnePlus is a Chinese smartphone manufacturer. Known for offering high-end specs to Android fans at affordable prices, they’re looking to diversify into the TV market in 2019. Not too much information is available about the set yet, but expect a “clean, efficient, and smart” hub 4K LED TV.

9. Linux kernel’s Torvalds: ‘I am truly sorry’ for ‘unprofessional’ rants, I need a break to get help(The Register)

Maybe you can teach an old dog new tricks. I have my doubts. Recognizing a problem is the first step to finding a solution. Linus Torvalds is the superhuman creator of Linux, and “unprofessional” verbal attacker of fellow Linux programmers. Good luck, buddy!

Burnout plagues YouTube creators due to an insatiable appetite for their creations. The Verge describes the situation as one where YouTube makes empty promises about how to best combat burnout rates. However, the company says it is more about misconceptions on how it ranks videos and channels.

Thank you for visiting Tech Help Knowledgebase to read the Tech Wrap-Up Week 38 2018. If you liked this article, follow us on Twitter @techhelpkb and subscribe to our YouTube channel to keep in the loop.