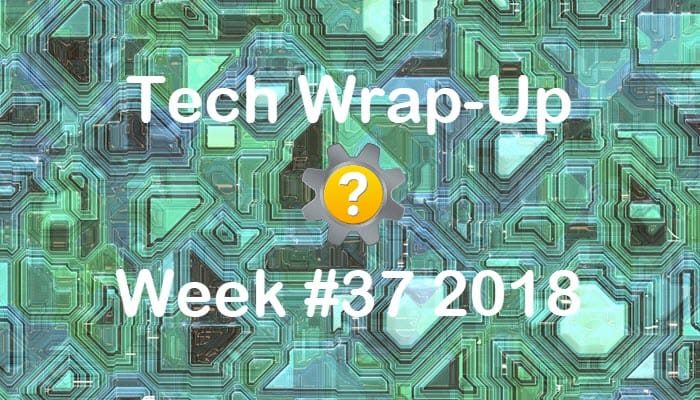 Tech Wrap-Up Week 37 2018. A look back at this week’s most engaging stories from the Tech Help Knowledgebase social media feeds. We order the story summaries below by user engagement (posts with the most likes, shares, clicks, hashtag clicks and detail expands) and by the number of impressions they received. Stories are in descending order with the most engaging story at the top. Our human-curated social media feeds include links to technology news, how-to and help articles, and video tutorials for common issues.

Examples of Universal Windows Platform (UWP) apps on Windows 10 are the Cortana and People apps.  A new malware persistence method uses UWP apps to infiltrate Windows 10 systems, primarily to add registry keys. Hijacked apps may not display in the Autorun list either, making it even harder to detect. Certain antivirus systems may detect the malware.

It’s the second Tuesday of the month. That means Patch Tuesday is with us once again, and our users engaged with this article more than any other today. Patch Tuesday is the day each month when Microsoft issues cumulative updates for Windows 10. At this point in time, updates are provided for Windows 10 Creators Update (version 1703) and greater. However, updates for Creators Update will end in October. Updates generally include security and non-security fixes. Click through the update links in the article to drill into the details of this month’s update.

3. Google Pixel 3 ‘Are you ready?’ teaser page shows up on the Google Store (9to5Google)

A pretty spartan Google Store landing page for Google’s flagship Pixel 3 smartphone showed up today. With all the leaks, being cryptic about it at this stage seems like a joke. A separate page also showed up with what appears to be color choices (white, black or mint green — click the G inside the phone outline). Pricing for the new line is still a mystery, however, and the exact colors have not yet been leaked. Made by Google events on October 9th in New York City and Paris will let the cat out of the bag.

4. The internet is crashing for millions (Kim Komando)

A DNS encryption key upgrade by the Internet Corporation for Assigned Names and Numbers (ICANN) may impact up to 1% of Internet users next month. You’ll know you’re one of them if you begin seeing “server failure” messages in your web browser instead of your favorite website. Close your browser and relaunch it, and/or clear your browser cache of cookies and history if it happens to you.

Stolen exploits built by the National Security Agency (NSA) are still infecting computers more than a year after their theft and publication. The exploits, such as EternalBlue, WannaCry, and NotPetya, infect unpatched Windows computers with cryptocurrency mining malware. With more than 900,000 vulnerable servers, it’s past time for server administrators to patch their machines.

The days are ticking down to the moment when Mac users get a free macOS upgrade. Two hands worth of fingers is all they’ll need for the countdown. Mojave arrives on Monday, September 24. With it comes night mode to reduce eye strain, and a refreshed Mac App Store design. Also worth noting is some iOS apps may cross-over to macOS in this release.

10. Will we ever get tired of buying iPhones? (The Verge)

If you watched or read about the big Apple Event today in any detail, there is probably a new iPhone in your future. But why? Historically, the iPhone was a unique product — the first smartphone. This piece dives into how an iPhone is priced like a luxury good but replaced like a basic consumption good. Apple locks users into its ecosystem. Some won’t even consider an Apple alternative. That alone serves Apple’s future well even as iPhone alternatives improve and further extend into the market.

Thank you for visiting Tech Help Knowledgebase to read the Tech Wrap-Up Week 37 2018. If you liked this article, follow us on Twitter @techhelpkb and subscribe to our YouTube channel to keep in the loop.