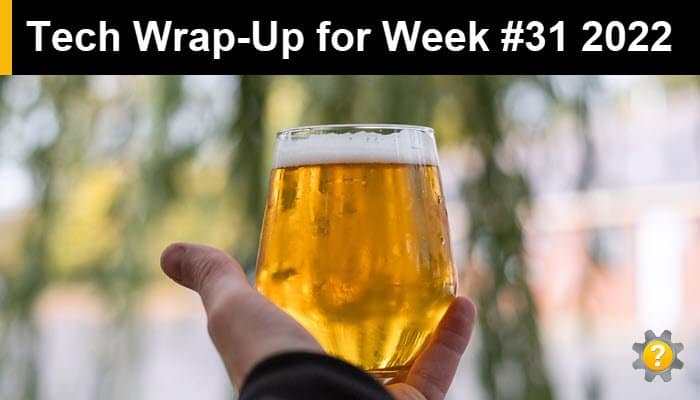 Tech Wrap-Up Week 31 2022, a week that ushered in August, and which featured Girlfriend Day, Ice Cream Sandwich Day, Watermelon Day, Chocolate Chip Cookie Day, and Beer Day. Today, we look back at this week’s ten most engaging stories from the Tech Help Knowledgebase social media feeds. We order the story summaries below by user engagement (posts with the most likes, shares, clicks, hashtag clicks and detail expands) and by the number of impressions they received. Stories are in descending order with the most engaging story at the top. Our human-curated social media feeds include links to technology news, how-to and help articles, and video tutorials for common issues.

Stories curated for our feeds are from our staff writers or culled from third-party sources that produce content related to the categories covered by our site. See the summaries and links below for this week’s top stories by user engagement. Follow us on Twitter, Facebook, Instagram, and YouTube to interact with our feeds.

1. The top 11 malware strains you need to worry about (ZDNet)

Cybersecurity watchdogs from the United States and Australia recently released a list of eleven top malware threats from the past ten years. The malware on the list ranges from trojans to ransomware and mostly targets financial gain instead of espionage. The US Cybersecurity and Infrastructure Security Agency (CISA) also offers an overview of how the malware works and mitigation recommendations.

2. Google Chrome Running on More Than 6 in 10 Computers Out There (Softpedia)

A new month always brings statistics about the previous month. In keeping with this tradition, StatCounter released web browser market share statistics for July that show Google Chrome running on 66.14 percent of desktop computers worldwide. Coming in a distant second is Microsoft Edge, with a 10.86 percent market share for July.

4. iOS 16 Hidden Features and Settings You’ll Want to Try On Your iPhone (CNet)

In more iOS 16 news, CNet points out five hidden features and settings coming to Apple’s mobile operating system. Among the features are the ability to password-protect the Hidden album, view and share Wi-Fi passwords, duplicate photo and video removal, pin tabs in Safari, and more. Read the article to find out how.

Google released Chrome 104 this week with 27 security fixes, an enhanced Web Bluetooth API, as well as other features and enhancements. We recommend our readers update their Chrome installations as soon as possible.

6. The hidden privacy report in your phone you should start checking (Kim Komando)

You do not have to be a cybersecurity expert to adjust your smartphone app settings to achieve the greatest level of privacy. In the case of iOS, Apple added an App Privacy Report in iOS 15.2. The report shows users which apps are accessing what data. For example, your bird call identification app may need access to your phone’s microphone to function, but it does not need access to your email address or text messages to work.

8. Google Chrome Users Could Soon Be Able to Pay With Apple Pay on iPhones (Softpedia)

The walled garden is collapsing. Upon the release of iOS 16, Apple may allow iPhone users to use Apple Pay with browsers other than Safari. iOS 16 beta 4 already permits testers to use Apple Pay with a third-party browser like Microsoft Edge. Apple has yet to issue a formal announcement about it, so there is still time for Lucy to pull the football away from Charlie Brown.

Right on time and on schedule comes Google’s August security and feature update for its Pixel line of smartphones. Imagine having a device that receives a feature and security update once per month and on pretty much the same day each month. There is no need to imagine it since that is what Google Pixel phone users receive. It is one of my favorite Pixel attributes.

Thank you for visiting Tech Help Knowledgebase to read the Tech Wrap-Up Week 31 2022, a summary of this week’s ten most engaging stories. If you liked this article, follow us on Twitter @techhelpkb and subscribe to our YouTube channel to keep in the loop.