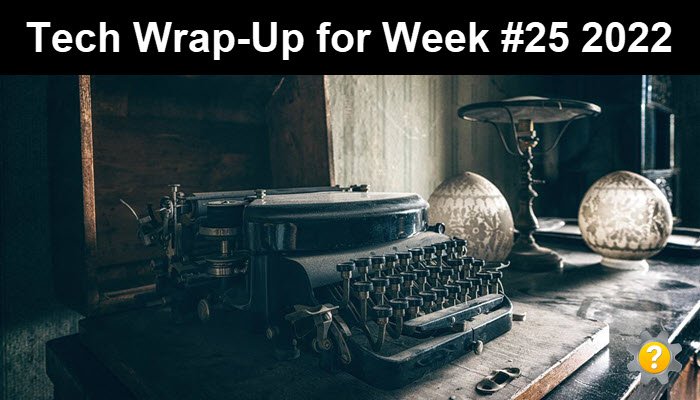 Tech Wrap-Up Week 25 2022, a spectacular week that brought us the Summer Solstice, National Kissing Day, National Typewriter Day, and National Take Your Dog to Work Day. I do not normally like to play favorites, but I am partial to Kissing Day, with Take Your Dog to Work Day a strong second. All you need is love. Today, we look back at this week’s ten most engaging stories from the Tech Help Knowledgebase social media feeds. We order the story summaries below by user engagement (posts with the most likes, shares, clicks, hashtag clicks and detail expands) and by the number of impressions they received. Stories are in descending order with the most engaging story at the top. Our human-curated social media feeds include links to technology news, how-to and help articles, and video tutorials for common issues.

Stories curated for our feeds are from our staff writers or culled from third-party sources that produce content related to the categories covered by our site. See the summaries and links below for this week’s top stories by user engagement. Follow us on Twitter, Facebook, Instagram, and YouTube to interact with our feeds.

1. Your email is a major source of security risks and it’s getting worse (ZDNet)

According to a recent Trend Micro report, malware delivered via email experienced a year-over-year 196% increase in 2021. Over 74% of the threats blocked by Trend Micro last year were email threats. Trend Micro used data collected from its enterprise customers that use Cloud App Security on top of Google Workspace and Microsoft 365. Some good news in the report states that ransomware threats sent by email declined in 2021.

2. 3 tricks to see if your passwords are being sold on the Dark Web (Kim Komando)

Microsoft Edge is set to receive some new built-in tools. Among the tools are a calculator, an Internet speed test, and a unit converter. Edge users should see the new tools starting in August 2022.

Microsoft has taken a lot of heat over the years for its foray into open-source — some of it justified, some of it not. This piece from InfoWorld suggests that Microsoft’s open-source contributions have been consistent since declaring its open-source dedication back in 2014 when CEO Satya Nadella said, “Microsoft loves Linux.” The bottom line: money influences Microsoft’s love for open-source.

8. How can I keep junk email out of my inbox without juggling two or more email accounts? (ZDNet)

Ed Bott, the man, the myth, the legend, explains to us underlings how to best keep spam out of your inbox using aliases. First, Ed goes into how to use aliases with Gmail. Next, he describes how aliases work in Outlook. If you want to spend money on unlimited aliases, Ed suggests trying SimpleLogin, which also offers a free plan with up to 15 aliases for one mailbox.

The inventor of the World Wide Web seeks to save his invention from the grasp of Big Tech. Instead of embracing a Web3 blockchain-based vision of the future, Berners-Lee instead sees a decentralized web architecture built on a platform called Solid with users in control of their data. This entails transferring user data from Big Tech to the people with the objective of improved interoperability, speed, scalability, and privacy.

The headline pretty much says it all. In the most recent iOS 16 beta, the Messages app now includes an option to “Report Junk” for SMS/MMS messages. This allows iOS device users to report spam messages directly to carriers instead of only reporting such messages to Apple.

Thank you for visiting Tech Help Knowledgebase to read the Tech Wrap-Up Week 25 2022, a summary of this week’s ten most engaging stories. If you liked this article, follow us on Twitter @techhelpkb and subscribe to our YouTube channel to keep in the loop.