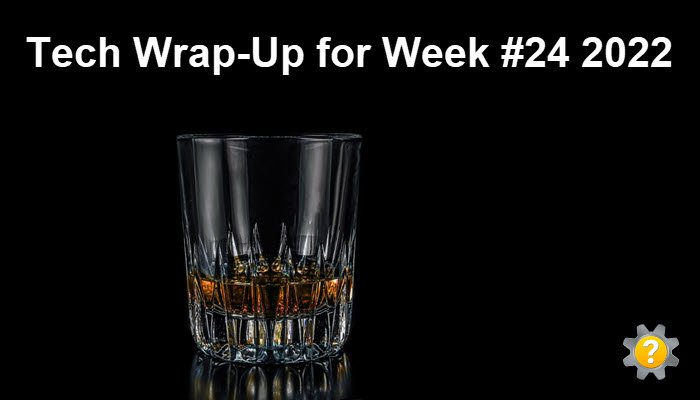 Tech Wrap-Up Week 24 2022, a profound week that included National Weed Your Garden Day, National Bourbon Day, Microsoft Internet Explorer Died Day, and National Fudge Day. Weed, bourbon, IE, and fudge. It sounds like a party to me. Today, we look back at this week’s ten most engaging stories from the Tech Help Knowledgebase social media feeds. We order the story summaries below by user engagement (posts with the most likes, shares, clicks, hashtag clicks and detail expands) and by the number of impressions they received. Stories are in descending order with the most engaging story at the top. Our human-curated social media feeds include links to technology news, how-to and help articles, and video tutorials for common issues.

1. This new Linux malware has a sneaky way of staying hidden (ZDNet)

Speaking of antivirus and malware protection, this new Linux malware, known as Syslogk, is a doozy. It delivers a backdoor that stays hidden on an infected machine until a command and control server sends “magic packets.” Syslogk, at least the version analyzed by Avast, only works on older Linux kernels. That could change at any time as the attackers continue to develop it.

2. Best antivirus for Android: Protection for your phone or tablet (PC World)

Most popular operating systems include some sort of antivirus protection. They may not afford the best protection, but it is better than nothing. Now think about your smartphone for a minute. How is it protected? Does it even need an antivirus app? This article offers five different options for Android users to protect their devices. Which one is best for your phone?

5. Don’t wait to install the June Windows update — it fixes a major security bug (The Verge)

If you are reading this, stop now and install the June Windows update if you have not already installed it. Hackers are actively exploiting the “Follina” flaw, which allows them to attack a user’s computer through Microsoft Word. Music would play and Felina would whirl.

Apple touted iOS 16 at its recent Developers Conference. However, no specific mention of what to expect from the iPhone 14 came up. A look into the iOS 16 code provides some clues about what Apple may bring to the latest iPhone. For example, multiple references exist that point to an always-on display (Android already has this feature). The code also suggests that the new Visual Lookup tap-and-lift tool may arrive too. The article also refers to a Pro mode for the Camera app.

Microsoft released a security update for Microsoft Edge 102, which also fixes PDF printing issues. We recommend that you update your Microsoft Edge installation as soon as possible.

The second Tuesday of June fell on June 14 this month, which means yesterday was Patch Tuesday in Microsoftland. Microsoft released 55 security fixes, three of which had a Critical rating. We recommend that Windows users download and install the update at their earliest convenience.

Apple intends to release macOS Ventura to the public this fall, probably in October 2022. The five new features referenced in this article are Continuity Camera, Handoff for FaceTime, Undo Send and Editing for email and text messages, Passkeys, and new Metal 3 tools for gaming. Pop over to Mac Observer to read their descriptions of each new feature. If you are a Mac user, you will be glad you did.

Thank you for visiting Tech Help Knowledgebase to read the Tech Wrap-Up Week 24 2022, a summary of this week’s ten most engaging stories. If you liked this article, follow us on Twitter @techhelpkb and subscribe to our YouTube channel to keep in the loop.