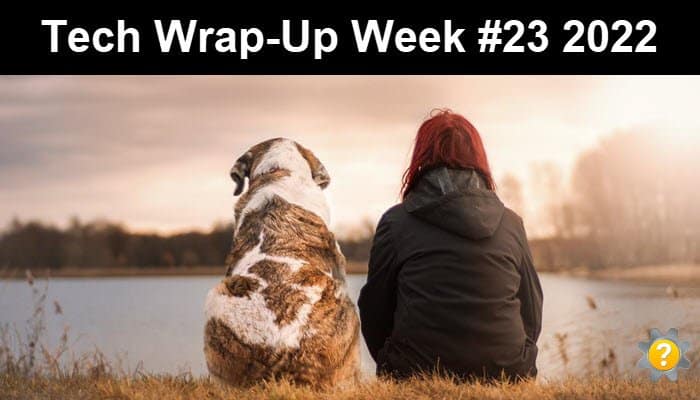 Tech Wrap-Up Week 23 2022, a week that brought us National Yo-Yo Day, National Chocolate Ice Cream Day, National Best Friends Day, and National Donald Duck Day. Anyone who told you that the second week in June is not all fun and games was dead wrong. Today, we look back at this week’s ten most engaging stories from the Tech Help Knowledgebase social media feeds. We order the story summaries below by user engagement (posts with the most likes, shares, clicks, hashtag clicks and detail expands) and by the number of impressions they received. Stories are in descending order with the most engaging story at the top. Our human-curated social media feeds include links to technology news, how-to and help articles, and video tutorials for common issues.

Prevention against attacks and malware sounds like a good idea no matter whether you are an individual or an enterprise. Microsoft Defender for Endpoint (MDE) now includes a way for administrators to do that with unmanaged Windows devices on their network. The idea is to detect and contain compromised devices within the network so they cannot communicate with other devices in the network.

2. This new Linux malware is ‘almost impossible’ to detect (ZDNet)

Researchers from Blackberry and Intezer discovered Symbiote, a parasitic new Linux malware that provides attackers with rootkit functionality. Attackers may have developed Symbiote to target financial institutions in Latin America. For example, some domain names associated with the malware impersonate Brazilian banks as well as the Federal Police of Brazil.

This zero-day involves a flaw in the Support Diagnostic Tool known as the Follina vulnerability. An attacker could use a malicious Word document to exploit the flaw and take control of a device. The flaw impacts all supported versions of Windows. There is no patch, although Microsoft has suggested a workaround.

4. Cloud computing: Here’s the security threat you should be most worried about (ZDNet)

A survey of 700 cloud security experts determined that the biggest cloud computing cybersecurity challenge is poor identity, access, and credential management. The survey points to a shift toward remote and hybrid work as a primary cause since remote workers often access corporate networks using SaaS and cloud-based productivity applications.

Microsoft customers with a Windows 10 or Windows 11 Enterprise E3 license are in for a free treat. Windows Autopatch is a new service that automatically manages the deployment of Windows quality and feature updates, firmware, apps, and drivers for enterprise updates. The service is now in public preview. Look for general availability in July 2022.

6. Apple Is Making Safari the Best Browser on iPhone (Softpedia)

Your iPhone’s native browser is getting a makeover. For example, coming to Safari upon the release of iOS 16 are new features like Shared Tab Groups and passkeys. Shared Tab Groups allow Safari users to share website collections with friends and family. Passkeys, which are unique digital keys that are easy to use, aim to replace passwords with biometric verification. Look for iOS 16 in July.

7. Google Chrome has tons of hidden experimental features — here’s how to enable them (Tom’s Guide)

A red flag is a warning sign. A Google Chrome flag is an experimental feature in the world’s most popular browser. Chrome users have the ability to enable Chrome flags in Windows, macOS, Android, and iOS. Before you start tweaking Chrome on all your devices, it is important to note that Chrome flags are experimental in nature. In fact, Google warns users, “By enabling these features, you could lose browser data or compromise your security or privacy.” Therefore, enabling a Chrome flag is a red flag.

8. Google Meet for teachers can automatically transcribe lessons into a Google Doc (The Verge)

I am old enough to remember when iPads in the classroom were all the rage. Today, there is nary an Apple product in classrooms albeit in the pockets or backpacks of some students. Google won the battle of the classroom with Chromebooks and a host of Google services, like Google Meet, that goes with them. Now, teachers are getting an auto-transcript feature in Google Meet if they have signed up for Google Workspace for Education Plus and Teaching and Learning Upgrade plans.

As mentioned above, Safari is set to receive many new features when iOS 16 comes out. Features include Shared Tab Groups and passkeys. However, Safari’s makeover isn’t confined to iOS 16. Devices compatible with iPadOS 16 and macOS Venture will also benefit.

There are two schools of thought on saving articles to read later. The first school opens a new tab and keeps it open indefinitely until they stumble back to read the article in the future. The second school of thought adds articles to a reading list, akin to a bookmark. That way, you can store a boatload of articles to read at a later time without having a bunch of tabs open that chew up your computer’s resources.

Thank you for visiting Tech Help Knowledgebase to read the Tech Wrap-Up Week 23 2022, a summary of this week’s ten most engaging stories. If you liked this article, follow us on Twitter @techhelpkb and subscribe to our YouTube channel to keep in the loop.