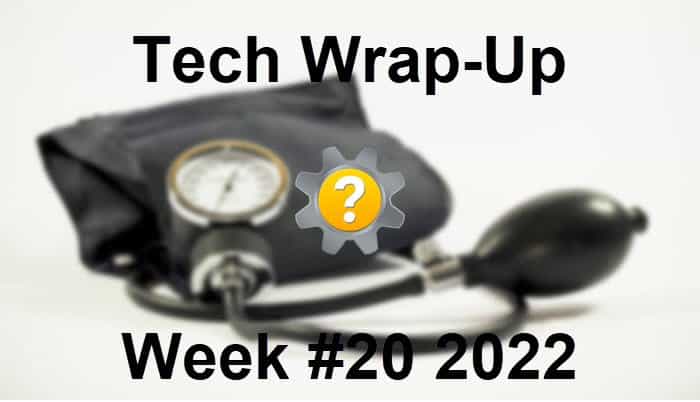 Tech Wrap-Up Week 20 2022, a week in which we collectively rejoiced in National Barbecue Day, World Hypertension Day, the 42nd anniversary of the Mount St. Helens eruption, and National Streaming Day. We may need a vacation after all the excitement. Today, we look back at this week’s ten most engaging stories from the Tech Help Knowledgebase social media feeds. We order the story summaries below by user engagement (posts with the most likes, shares, clicks, hashtag clicks and detail expands) and by the number of impressions they received. Stories are in descending order with the most engaging story at the top. Our human-curated social media feeds include links to technology news, how-to and help articles, and video tutorials for common issues.

Contrary to the potential vulnerability discussed above, this security flaw may have been actively exploited in the wild. Fortunately, Apple has since patched the bug, an out-of-bounds write issue impacting macOS Big Sur 11.6, watchOS 8.6, and tvOS 15.5. This is the fifth zero-day flaw patched by Apple so far this year, according to Bleeping Computer.

Firefox 100.0.1 is an out-of-band update to Firefox. Mozilla issued the Firefox update to fix some Picture-in-Picture issues and to improve its security sandbox on Windows. We encourage our users to update Firefox as soon as possible.

3. Researchers claim malware can be loaded onto iPhones that have been powered down (TechSpot)

That sounds bad. No evidence shows any exploits of this vulnerability in the wild, at least not yet. According to this piece by TechSpot, the Find My feature in iOS still works for a few hours after a user turns off their iPhone. Certain features run in low-power mode after an iPhone shuts down. Some low power mode firmware is not signed or encrypted. As such, an attacker could modify the firmware to run malware.

4. The Big Myth About Mac Computers You Need To Stop Believing (SlashGear)

In true Apple style, when the going gets rough, change the marketing. Once thought to be impenetrable to malware, the truth is that pretty much any computer is subject to attack — including Macs. The best defense begins with users adhering to best practices when it comes to safe browsing, downloading, and connecting to HTTPS sites only.

A new botnet variant is targeting a critical flaw to install cryptocurrency mining malware on Linux and Windows systems. Sysrv-K, a new variant of the Sysrv botnet, targets a flaw in the Spring Framework. Even worse, Sysrv-K can also gain control of web servers. Organizations should secure internet-facing systems, apply security updates, and protect credentials, according to Microsoft.

The world’s most popular web browser can help improve your online safety. Google Chrome web browser includes a feature called Safety Check. Run Safety Check’s safe browsing tools to detect if you have any compromised saved passwords or malicious extensions installed. The free tool also checks to see if you have turned off Google’s Safe Browsing feature and if you have the latest version of Chrome installed.

I have already read about what’s coming to iOS 15.5, and ZDNet is right. It is underwhelming. Still, our users engaged the most with this article today, so here it is. iOS 15.5 brings enhancements to the Apple Cash card and Podcasts. In particular, Wallet now lets Apple Cash users send and request money from their Apple Cash Card. With regard to Podcasts, the feature now includes a setting to limit the number of episodes stored on your device as well as automatically deleting the old podcasts.

8. Google will start distributing a security-vetted collection of open-source software libraries (The Verge)

The security-vetted software libraries, numbering 550 major libraries at the moment, are coming to Google Cloud customers in the third quarter of 2022. The service, known as Assured Open Source Software, is comprised of open-source packages used by Google internally. Google scans and analyzes the packages on a regular basis for vulnerabilities. An Open Source Maintenance Crew of Google engineers will also work with the libraries’ maintainers in an effort to improve security.

Not surprisingly, our users interacted a lot with iOS 15.5 articles today. This piece from Macworld covers much of the same material as ZDNet‘s article above but in their own Macworldy way. I like reading about Apple-related updates from the Apple-focused resources out there.

10. How to Block Those Annoying Spam Texts (Popular Mechanics)

Who doesn’t love Popular Mechanics? Now and again, they publish a tech article, and our users lap it up. It seems as though a scourge of spam texts is blanketing the planet. This article shares some information about how spam texts work, efforts to reduce spam texts, and some great tips for stopping them.

Thank you for visiting Tech Help Knowledgebase to read the Tech Wrap-Up Week 20 2022, a summary of this week’s ten most engaging stories. If you liked this article, follow us on Twitter @techhelpkb and subscribe to our YouTube channel to keep in the loop.