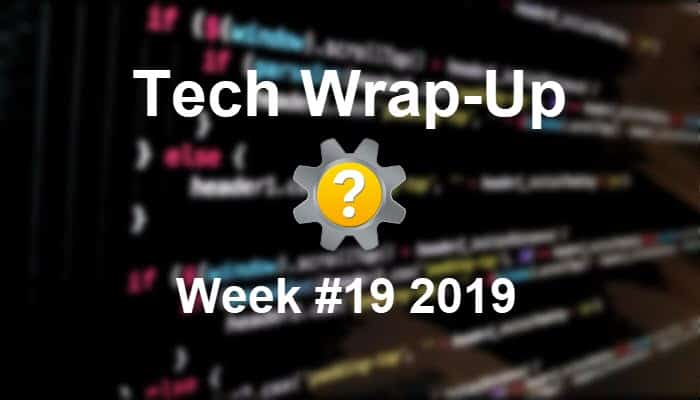 Tech Wrap-Up Week 19 2019, a week that featured Microsoft Build, Google I/O, Let It Be‘s 49th anniversary, the Stanley Cup Playoffs third round, and Uber‘s IPO. Today, we look back at this week’s ten most engaging stories from the Tech Help Knowledgebase social media feeds. We order the story summaries below by user engagement (posts with the most likes, shares, clicks, hashtag clicks and detail expands) and by the number of impressions they received. Stories are in descending order with the most engaging story at the top. Our human-curated social media feeds include links to technology news, how-to and help articles, and video tutorials for common issues.

All fingers point toward TypeScript becoming an essential language for developers, according to a report from RedMonk. Released by Microsoft in 2012 as an open-source rendition of JavaScript, TypeScript now ranks as the top programming language today. TypeScript does not replace JavaScript, but compiles to JavaScript, and does not specify data types.

The Central Intelligence Agency (CIA) announced a .onion version (requires Tor Browser) of their site today, one that operates on the Tor network. They created their onion site to allow secure access to people no matter where they are located. The site mirrors the content on their main website and includes secure information reporting and job application links.

3. How to schedule an email in Gmail (The Verge)

Write now, send later. Gmail’s new scheduling feature lets users do just that. Scheduling emails used to require a third-party add-on. Native support for scheduling changes that need. Click the triangle next to Gmail’s Send button and customize when you want the email to go.

4. Fidelity Investments will buy and sell Bitcoin for institutional customers within a few weeks (Bloomberg)

In October 2018, Fidelity Investments set up Fidelity Digital Assets to cater to its customers’ growing interest in cryptocurrency trading and investing. Unlike E*Trade and Robinhood, however, Fidelity’s Bitcoin trading is limited to its institutional customers. Bitcoin’s price is up over 50% year-to-date which may be responsible for attracting more attention.

5. Microsoft will demote IE to a ‘mode’ inside Edge (Computerworld)

Once the king of browsers, Microsoft intends to relegate Internet Explorer (IE) to “mode” status in the new Chromium-based Edge web browser. In the current Edge version, users must open Internet Explorer separately to access legacy sites or apps that require it. IE Mode allows those same legacy sites and apps to run inside the Edge wrapper instead.

Google updated its Android Distribution Dashboard this week. The latest version of its mobile operating system, Android 9 Pie, reached an installation rate of over 10% of Android devices. More than 2.5 billion devices run Android. Android 8 Oreo had only 4% adoption in the same 9-month time period. Nonetheless, Oreo maintains its lead as the Android version with the highest adoption rate. That may change as Pixel 3a and Pixel 3a XL phones come to market with Android 9 Pie installed.

After manic speculation drove Bitcoin’s price to five figures in 2017, the 2018 crash of Bitcoin’s price left more than a bad taste in investors’ mouths. Regardless of Bitcoin’s trading price, 1 Bitcoin still equals 1 Bitcoin. Partially aided by mainstream attention, sentiment seems to be swinging to the positive side. Investors appear to be dipping a toe or two into the Bitcoin pool.

A certificate signing issue impacted both Firefox and Tor Browser users over the weekend. For what seemed like no reason, users found their add-ons (extensions) disabled. At issue was an expired intermediate certificate. Firefox updated their browser to version 66.0.4 yesterday, and Tor Browser (which uses a special version of Firefox ESR) update theirs to version 8.0.9 today.

Thank you for visiting Tech Help Knowledgebase to read the Tech Wrap-Up Week 19 2019. If you liked this article, follow us on Twitter @techhelpkb and subscribe to our YouTube channel to keep in the loop.