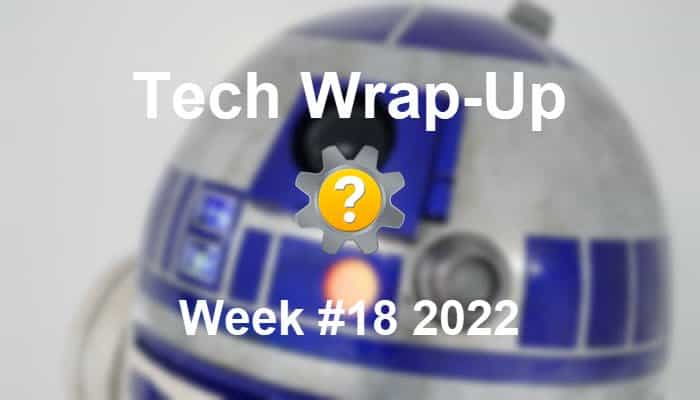 Tech Wrap-Up Week 18 2022. The first week of May brought us an extraordinary array of special days. National Brothers and Sisters Day, National Teacher Day, Stars Wars Day, World Password Day, and last but not least, National Nurses Day. Today, we look back at this week’s ten most engaging stories from the Tech Help Knowledgebase social media feeds. We order the story summaries below by user engagement (posts with the most likes, shares, clicks, hashtag clicks and detail expands) and by the number of impressions they received. Stories are in descending order with the most engaging story at the top. Our human-curated social media feeds include links to technology news, how-to and help articles, and video tutorials for common issues.

1. Mozilla is Working on a Mobile Version of Thunderbird (Thurrott)

It is cool that our users resonated with a Thunderbird article today. I would not have picked this piece from Thurrott as the top in user engagement. Live and learn. As a Thunderbird user, learning that a mobile app is coming soon was gratifying. It has a lot of competition, but I will give it a shot when it arrives.

Hands up, who pays attention to their Windows Registry? I don’t. But I would like to know if anything changed, diagnose any issues that come up, and remove malicious entries. The technique referenced in this article suggests Windows users could store existing registry keys in a snapshot variable. At a later time, users could create a current variable, then compare the two of them to review any changes made since the original snapshot.

An attempt to open a suspicious file in Google Drive yields a yellow warning banner. Now the same treatment applies to Google Docs, Sheets, and Slides. Hopefully, the addition of these warning labels helps users avoid malicious and potentially harmful content that appears to be legitimate documents. Google enables the feature by default.

A new survey suggests that 30 percent of cybersecurity professionals believe that bad actors are better at using artificial intelligence (AI) than those who try to defend against such attacks. The survey also shows that organizations experience difficulty with implementing AI to help them fend off attacks.

5. 5 Core Principles Of The Zero Trust Model Of Cybersecurity (Forbes)

Zero trust means an organization treats every user, every device, and every service that tries to connect to its network as hostile until otherwise proven. According to Forbes, the five core principles of the zero trust model are, 1) Assume the network is always hostile, 2) Accept that external and internal threats are always on the network, 3)…OK, I could list them all here, but a better suggestion is to visit the article to read about the remaining three principles.

Today is the day Firefox hit triple digits 18 years after its initial release. Mozilla released Firefox 100 on May 3 for Windows, Mac, Linux, iOS, and Android. The latest Firefox version improves upon its picture-in-picture mode by adding support for subtitles and captions. Also included are new wallpapers for mobile, clutter-free tabs, HTTPS-only mode on Android, and more. You can never have too many browsers.

Although this feature is still in testing with Windows insiders, it is coming. When it arrives, Windows 11 users will have the option to use an Xbox controller to launch up to three recently-played games, negating the need for a mouse and keyboard. Access to the feature, known as the “controller bar,” is via the central Xbox control button when a user is not logged into a game.

Remember 21.co and Earn.com? Before they morphed into a Coinbase shitcoin offering, these services attempted to compensate people in Bitcoin for the time it takes to sift through email. To prove an email or person emailing was worthy of the recipient’s time, an email included a monetary tip. Now Reacher, an open-source project using the Strike API, tries to solve the email spam problem using Bitcoin and Lightning Network payments. Sign up for Reacher here and send us an email to try it out: [email protected]

9. Linux gaming surges in popularity – is this the Steam Deck effect? (Tech Radar)

Referencing a new April 2022 hardware survey from Valve shows a month-over-month 1.14% increase in the number of gamers using Linux. The increase is second only to November 2021, which saw a 1.16% increase. The announcement of Steam Deck occurred in July last year. This suggests that the increase in popularity may be attributable to Steam Deck.

Three worlds colliding. That is the solidarity it takes to bring support for passwordless logins to devices and browsers. Apple, Google, and Microsoft agreed today to support a password-free sign-in standard from the FIDO (Fast Identity Online) Alliance and World Wide Web Consortium (W3C). A change to the standard means users will access their devices and browsers the same way they access their smartphones (fingerprint, face scan, PIN, etc.).

Thank you for visiting Tech Help Knowledgebase to read the Tech Wrap-Up Week 18 2022, a summary of this week’s ten most engaging stories. If you liked this article, follow us on Twitter @techhelpkb and subscribe to our YouTube channel to keep in the loop.