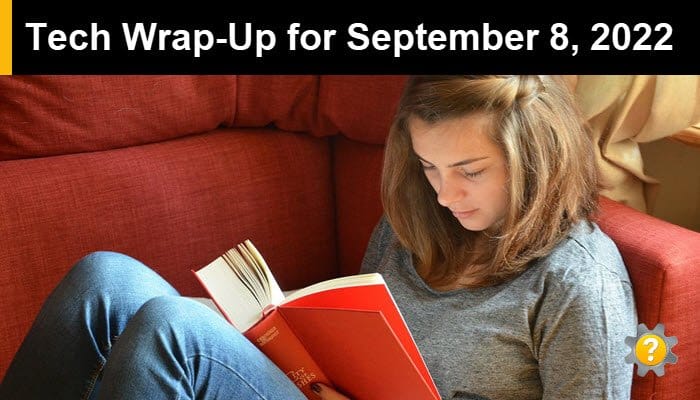 Tech Wrap-Up 9-8-2022, which is Literacy Day. The world rejoiced this past Tuesday for Read a Book Day and continues to celebrate the reading tradition today with Literacy Day. There are few greater joys in life than reading a great story. It may be with a keen sense of the obvious that reading a good story requires literacy — the ability to read (and write). The literacy rate for adults in the United States this year is 79 percent, and 54 percent of adults read below a sixth-grade level. The state with the highest literacy rate is New Hampshire, while California is the state with the lowest literacy rate. While you decide between a novella or graphic novel, Tech Help Knowledgebase wraps up the day with a summary of today’s most engaging stories from our social media feeds. We order the story summaries below by user engagement (posts with the most likes, shares, clicks, hashtag clicks, and detail expands) and by the number of impressions received. Our human-curated social media feeds include links to technology news, how-to and help articles, and video tutorials for common issues.

1. Malware has a terrible new way to get to your computer (Digital Trends)

Putting cybersecurity in the hands of seven-year-old Minecraft gamers is not a good idea. Yet between July 2021 and July 2022, researchers from Kaspersky Labs found that a significant amount of malware spread in-game. Minecraft on Windows was the preferred vector of attack. The lure of downloading loot boxes and free skins contributes to malware as this is exactly where the malware hides. Downloaders like info-stealers and cryptocurrency miners accounted for almost 90 percent of the malware.

2. Even Steve Jobs’ daughter is mocking the iPhone 14 (Android Authority)

I think Apple died with Steve Jobs. Sure, Apple keeps regurgitating iteration after iteration of Steve’s iPhones and iPads with a faster processor, more storage, more memory, etc. Oh yeah, they make a watch, too, that requires one of their phones. Apple deploys gimmicks to retain captives inside its jail (walled garden?) like a charging cable that works with nothing else, easily-remedied green messaging bubbles, and the like. Now, Apple wants to charge you 800 bucks for last year’s phone model with a 14 painted on it. Eve Jobs, the daughter of Steve, seems to agree. Find another sucker, Apple.

Beginning in January 2023, Chrome extensions like ad blockers and privacy tools that rely on the Manifest v2 API will stop working. Extension developers must rewrite the extensions using Manifest v3. Unfortunately, it seems that extensions written in Manifest v3 do not work very well, at least at this stage. Extensions on Safari and Edge may have the same issues since Apple and Microsoft endorse Manifest v3.

How many devices connect to your home Wi-Fi each day? The average in the United States is more than ten devices, which is the crux of the security issue with home Wi-Fi networks. Each one of those devices represents a hacking opportunity or an opportunity for unauthorized access to your home network. To minimize the hacking potential, CNet has a few suggestions, like using a strong Wi-Fi password that you change frequently, changing the default router access information, turning on firewall and Wi-Fi encryption, using a guest network, and more.

I feel like the article headline pretty much sums it up. Those with devices that support iOS 16 will have the opportunity to download and install it on September 12. Check out ZDNet’s article about how to prepare your iPhone for the iOS 16 update.

6. ChromeOS 105 is now rolling out to most current Chromebooks (Chrome Unboxed)

Chrome OS 105 is here with a new gaming overlay interface for Android games. The interface should improve over time and include a larger number of games, but the feature will make Chromebook gamers happy. ChromeOS 105 also includes bug fixes and security updates. We recommend our readers keep their Chromebooks up to date.