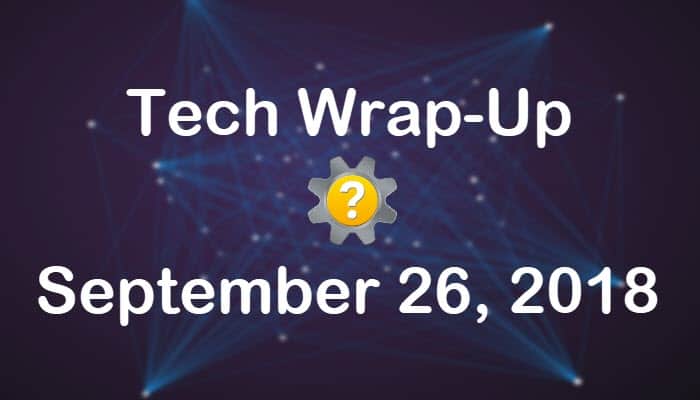 Tech Wrap-Up 9-26-2018. Wrapping up the day with a summary of today’s most engaging stories from the Tech Help Knowledgebase social media feeds. We order the story summaries below by user engagement (posts with the most likes, shares, clicks, hashtag clicks and detail expands) and by the number of impressions they received. Stories are in descending order with the most engaging story at the top. Our human-curated social media feeds include links to technology news, how-to and help articles, and video tutorials for common issues.

The disparity seems astounding, but it’s a half-truth. Cost estimates of materials that go into making an iPhone XS Max are $443. That excludes the cost of research, development, manufacturing, marketing, sales, etc. On the surface, a 200% profit margin is sweet. In reality, margins are slimmer. Apple saved some money on manufacturing by removing components related to 3D Touch. The A12 chip, however, helped drive manufacturing costs up. According to TechSpot’s piece, the iPhone XS Max outsold the iPhone XS by a 4:1 margin in its first week, so the price is not a deterrent.

Congratulations, Microsoft, for reaching 700 million Windows 10 devices. Windows 10 launched in July 2015. At the time, Microsoft aspired to have Windows 10 installed on 1 billion devices within 3 years. That didn’t happen. Since November 2017, the tech giant added 100 million devices to its previous total. The impending release of Windows 10 October Update as early as next week could boost the device total higher.

Jack Poulson, a former Google research scientist, and former Stanford University math professor, quit his Google job over Project Dragonfly. Dragonfly is Google’s reported effort to build a censored search engine for China. Poulson submitted an open letter to American lawmakers calling for increased oversight, accountability, and transparency in the technology industry in the wake of Dragonfly coming to light.

4. Android at 10: the world’s most dominant technology (Verge)

Happy 10th-ish birthday, Android. Android’s actual birthday is September 23rd, 2008, or October 20, 2008, depending on how you look at it. Keep in mind that Steve Jobs announced the original iPhone on January 9, 2007. As much as Android dominates market share today, it is still an answer to Apple’s product.

In Tom’s Hardware’s words, “we were able to go from hitting the power button to opening the Windows desktop in just 4.93 seconds.” How did they swing such a speedy boot? A combination of hardware, starting with an SSD. The article lists the machine’s specifications so you can build your own speedy Windows 10 desktop.

6. Microsoft’s Windows 10 October Update might arrive next week (The Inquirer)

The Inquirer spotted a tidbit of intel from the MyDigitalLife forum about the Windows 10 October Update release date. The name implies an October release timeframe, but Windows 10 users could see the update as soon as Tuesday, October 2.

Privacy advocates were up in arms this week about a change Google made to Chrome login behavior. For example, users who logged into Gmail automatically logged into Chrome too. Although Google was quick to defend the behavior, a method to disable the feature arrives next month with Chrome 70.