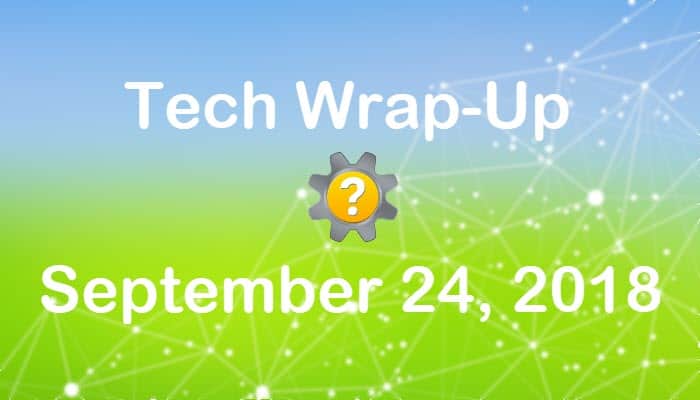 Tech Wrap-Up 9-24-2018. Wrapping up the day with a summary of today’s most engaging stories from the Tech Help Knowledgebase social media feeds. We order the story summaries below by user engagement (posts with the most likes, shares, clicks, hashtag clicks and detail expands) and by the number of impressions they received. Stories are in descending order with the most engaging story at the top. Our human-curated social media feeds include links to technology news, how-to and help articles, and video tutorials for common issues.

A newly discovered Firefox bug may crash the browser, or even freeze Windows, Mac, and Linux computers. Frozen computers require a hard reboot. The exploit does not impact iOS and Android versions of Firefox. Firefox added the bug to Bugzilla, its tracking list, but hasn’t released a fix for it yet.

2. MacOS Mojave 10.14 has arrived: How to download, best new features and more (CNet)

Available today as a free upgrade to macOS users is macOS Mojave, which is version 10.14. Download macOS Mojave from the Mac App Store. Look at the top of the App Store window for the new version, then click the Update button. CNet lists some of the best new features as Dark mode, familiar iOS apps available on macOS, Group FaceTime, and Stacks.

Tor Browser is all about surfing the internet anonymously and privately. The Tor Browser 8.0.1 update is based on several security updates to Firefox categorized as “low” or “moderate.”

5. Microsoft’s new quantum computing lab in Denmark has been tasked with building the qubit of the future (TechSpot)

Microsoft’s new quantum materials lab in Denmark builds the qubit — the quantum processing cores of a quantum computer. It is critical work since even a single atom defect could render a qubit useless. The Denmark location is Microsoft’s fifth quantum facility, but the only one tasked with building the qubit.

6. Some iPhone Users Are Saying Colors Look ‘Off’ After Upgrading to iOS 12 (Gizmodo)

iPhone X users report a “washed out” or “off” look to colors after upgrading from iOS 11 to iOS 12. There is no clear reason for the difference provided yet. One of the main selling points for the iPhone X was the improved color gamut on its OLED screen.

New iPhone XS customers reported reception issues on Apple’s support forum, MacRumors forums, and on Reddit over the past few days. It is reminiscent of the Antennagate issue that plagued the iPhone 4 launch all those years ago. So far no word from Apple on a possible cause.