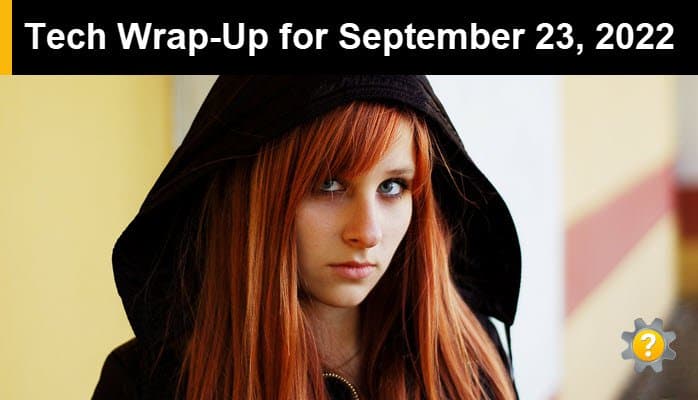 Tech Wrap-Up 9-23-2022, which is Redhead Appreciation Day. Whenever I think of redheads, I think of American novelist Tom Robbins. On the subject of redheads, Robbins wrote, “Redheads are said to be children of the moon, thwarted by the sun and addicted to sex and sugar.” I will take his word for it. Only 2 percent of the world’s population has red hair unless you visit Ireland, where 10 percent of the population are redheads. While you wonder if ginger is a derogatory term for redhead or not, Tech Help Knowledgebase wraps up the day with a summary of today’s most engaging stories from our social media feeds. We order the story summaries below by user engagement (posts with the most likes, shares, clicks, hashtag clicks, and detail expands) and by the number of impressions received. Our human-curated social media feeds include links to technology news, how-to and help articles, and video tutorials for common issues.

Mozilla released Firefox version 105 this week. The update patches nine security flaws, four of which Mozilla categorized as High impact. The most serious flaw is a memory corruption issue that, if exploited, would allow an attacker to run arbitrary code. On the flip side, Firefox 105 handles low-memory situations better and is less likely to run out of memory on Linux. Make sure to update your Firefox installation soon.

2. Microsoft Says File Explorer Tabs Were the “No. 1 Ask” from Users (Softpedia)

Of all the possible feature requests one could submit for Windows 11, Microsoft says the top feature request was support for tabs in File Explorer. Panos Panay, Chief Product Office at Microsoft, says, “Windows 11 brought a sense of ease to the PC, with an intuitive design people love. We’re building on that foundation with new features to ensure the content and information you need is always at your fingertips, including updates to the Start menu, faster and more accurate search, Quick Settings, improved local and current events coverage in your Widgets board, and the No. 1 ask from you, tabs in File Explorer. All of this helps Windows anticipate your needs and save you time.”

Attackers recently broke into Microsoft Exchange admin accounts to send spam emails about fake sweepstakes. The attack could have been thwarted if the admin accounts had enabled multi-factor authentication (MFA). We recommend our readers always enable two-factor authentication (2FA) or MFA on any account that supports it. For accounts that do not support 2FA or MFA, contact the site administrator to request they add this function.

I am a big fan of Proton and its suite of privacy-oriented applications like Proton Mail, Proton Calendar, and Proton VPN. The latest Proton application just out of beta is Proton Drive, a more private alternative to Google Drive. Proton protects data stored in its Proton Drive service with end-to-end encryption. Proton Drive is open source so anyone can take a peek at the source code to see how its protections work.

5. A Look At The Lightning Network (Seeking Alpha)

The Lightning Network is a layer two payment system that runs on top of the Bitcoin network. It makes payments faster, cheaper, and more scalable than payments settled directly on Bitcoin’s base layer. As a payment network, Lightning has reached a critical mass of liquidity and usability. No company or country controls the Lightning Network.

Mozilla released Firefox 105.0.1 today to revert focus behavior for new windows back to the content area instead of the address bar. We recommend our readers update their Firefox installations with the update at their earliest convenience.