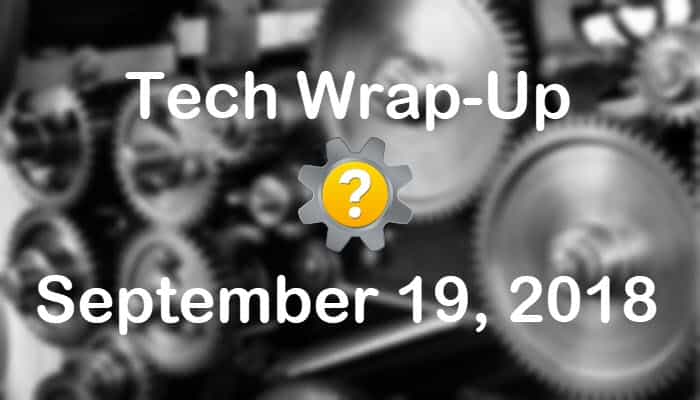 Tech Wrap-Up 9-19-2018. Wrapping up the day with a summary of today’s most engaging stories from the Tech Help Knowledgebase social media feeds. We order the story summaries below by user engagement (posts with the most likes, shares, clicks, hashtag clicks and detail expands) and by the number of impressions they received. Stories are in descending order with the most engaging story at the top. Our human-curated social media feeds include links to technology news, how-to and help articles, and video tutorials for common issues.

When you hear the term botnet it conjures up images of thousands of zombie devices working en masse on nefarious tasks like DDoS attacks. The Fbot botnet appears to be different. It cleans cryptocurrency mining malware from your device rather than installs it. Fbot targets smartphones, Amazon Fire TV, and set-top boxes that run Android, and cleans them of ADB mining scripts.

It’s been several years since the last Ghostery browser update. New versions of Ghostery for iOS and Android bring anti-tracking and ad-blocking capabilities and search based on Cliqz, Ghostery’s owner. Users should see “a cleaner, faster, safer mobile browsing experience,” as their team works on creating an ecosystem of privacy-oriented products.

Rumors abounded that Google would enter the smart display market. The rumors appear to have some substance. Leaked photos show Google Home Hub with a 7-inch display coupled with a $149 price tag. More information about Home Hub may arrive on October 9 during Google’s Pixel 3 hardware event.

Previously used only by Google in-house, Titan Security Key is now available to the public. It has two components used for two-factor authentication (2FA) — one USB-A and one Bluetooth. After setting up 2FA, use your password combined with a physical Titan Security Key to log into your account. Use Titan Security Key with sites that support FIDO U2F such as Google, Dropbox, Facebook, GitHub, and Twitter. The cost is $50.

There are a lot of great new features in iOS 12. Some improve usability, and some improve privacy and security. If iOS 12 isn’t your cup of tea, it’s possible to downgrade to iOS 11.4. Having a recent backup from before upgrading to iOS 12 makes the process easier but it is not imperative.

iOS 12 includes a new Screen Time feature. Screen Time allows parents to better monitor the amount of time their children (or themselves) spend in front of a screen. For example, schedule Downtime, which is a time range of restricted app access. App Limits lets parents set the amount of time a child can use apps. Check out the article for screenshots and extensive details about how to use Screen Time.

Chrome OS 69 rolls out Material Design to Chromebooks, and the ability to run Linux apps on supported devices. Also included are Night Light mode, voice dictation in any text field, and a refreshed Files interface.