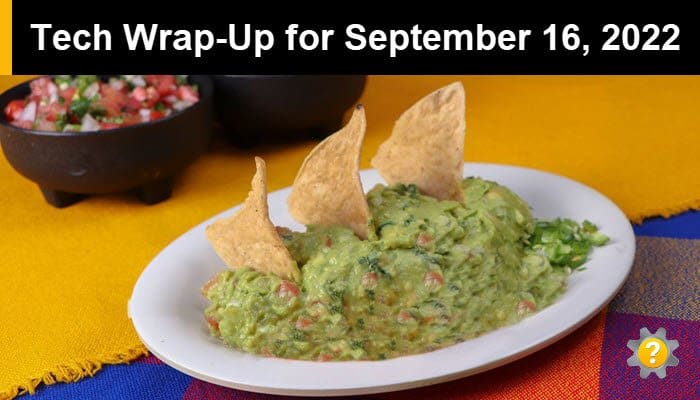 Tech Wrap-Up 9-16-2022, which is Guacamole Day. We all know avocados are the base guacamole ingredient. Did you know avocados are a fruit? Avocados are rich in monounsaturated fats that help lower bad cholesterol. They also contain vitamins C, E, K, and B6. When I mash up avocados to make guacamole, I like to add salt, pepper, garlic powder, and either lemon or lime juice. If I am social media friends with you, and you put tomatoes in your guac (aka yuckamole), that is cause for instant unfriending. While you codify guacamole into your life law instead of yuckamole, Tech Help Knowledgebase wraps up the day with a summary of today’s most engaging stories from our social media feeds. We order the story summaries below by user engagement (posts with the most likes, shares, clicks, hashtag clicks, and detail expands) and by the number of impressions received. Our human-curated social media feeds include links to technology news, how-to and help articles, and video tutorials for common issues.

Smart home compatibility is coming to a smart home near you. Matter is a new smart home connectivity standard supported by Apple, Google, Samsung, and Amazon. The idea behind Matter is to unify your connected devices so they communicate with each other and with a smart home app of your choosing. It looks like Apple’s Matter support arrives with iOS 16.1 and iPadOS 16.1. Google’s Matter support via its Google Home Developer Console went live this week. There is one caveat — since the Matter standard has yet to be finalized, there are no Matter-compatible accessories!

3. 12 WordPress site settings that are critical to your SEO success (Search Engine Land)

Most websites desire SEO success, and WordPress site owners are no different. Search Engine Land offers 12 great foundational tips for improving your WordPress site’s traffic and rankings. Included are how to set up homepage and blog settings, optimizing permalinks, using dynamic sitemaps, setting up an automated image optimizer, and more. Also included are ways to protect your SEO with WordPress security settings.

Another Apple oopsie reared its ugly head as new iPhone 14 owners tried to activate their shiny new phones. The bug prevented iPhone 14 users from activating the phones when connected to open Wi-Fi networks. Apple released iOS 16.0.1 two days after releasing iOS 16, and the update included a fix for the activation bug.

5. How to download Android apps without the Google Play Store (Android Police)

Sideloading apps on Android is possible but has a high risk level associated with it. Apps downloaded from unknown or untrusted sources may contain malware. For this reason, most Android device users download apps from Google’s official Google Play Store. For those who want to throw caution to the wind, Android Police recommends APKMirror as a brand they know and trust to install sideloaded apps on your Android phone.

6. Android apps on Windows 11 pick up performance improvements with September update (9 to 5 Google)

One benefit of Windows 11 is its native support of Android apps. The Windows subsystem for Android that makes it all possible received an update this week. Many improvements in the update relate to performance.