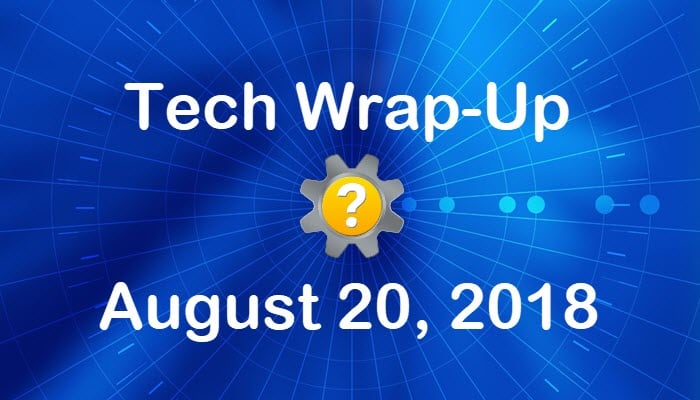 Tech Wrap-Up 8-20-2018. Wrapping up the day with a summary of today’s most engaging stories from the Tech Help Knowledgebase social media feeds. We order story summaries by user engagement (posts with the most likes, shares, and clicks) and by the number of impressions they received. Our human-curated social media feeds include links to technology news, how-to and help articles, and video tutorials for common issues.

Based on a new FCC filing, Google’s Chromecast streaming device is about to receive an upgrade. Earmarked for the upgrade is the cheapest Chromecast model too — the one that sells for around $35. The update adds Bluetooth support, and an increase in wi-fi antenna gain. Welcome changes to improve wi-fi connectivity over further distances, and to connect Bluetooth devices like speakers.

2. The Biggest Digital Exchanges Are Teaming Up To Police the Crypto Space (Bloomberg)

Gemini Trust Company is spearheading an effort to widen participation in the Virtual Commodity Association. According to a press release, a Working Group of digital asset exchanges Gemini, Bitstamp, BitFlyer USA, and Bittrex, “will work towards the goal of establishing an industry-sponsored, self-regulatory organization (SRO) to oversee virtual commodity marketplaces.” The Working Group will have their first meeting in September 2018.

WordPress owners take heed. A flaw in WordPress’s PHP framework could let an attacker fully compromise the system. Researchers from Secarma notified WordPress about the issue in February 2017, but the vulnerability still exists today.

4. I wish I could quit you, but cookies find a way: How to sidestep browser tracking protections (The Register)

A recent paper presented by researchers from KU Leuven in Belgium described a framework they built to analyze third-party network requests on websites. Top browsers, including Chrome, Safari and Tor, appear to be susceptible to bypasses in third-party request enforcement policies.

5. How to install Linux applications on Chrome OS (Android Police)

Software built to run on Linux distributions like Ubuntu and Debian now officially run on Chome OS too. This guide shows you how to get started since the process requires some Linux experience like setting up a Linux container. Since not all Chromebooks support Linux apps, consult their list of compatible devices before embarking on the process.

6. Amazon appears to have discontinued the Kindle Voyage (The Verge)

Kindle Voyage appears to have been supplanted by the new, more expensive Kindle Oasis. Some refurbished Voyages remain on the Amazon site, but new models are no longer presented for sale on the site or in comparison charts. Gone Voyage!

7. Despite What You Hear, The ICO Is Not RIP (Forbes)

Forbes analyses a report from ICOrating.com in this piece. The analysis finds that ICOs have raised 10 times more from investors so far in 2018 than in the first 2 quarters of 2017. Read further to learn why ICOs are still alive and kicking.