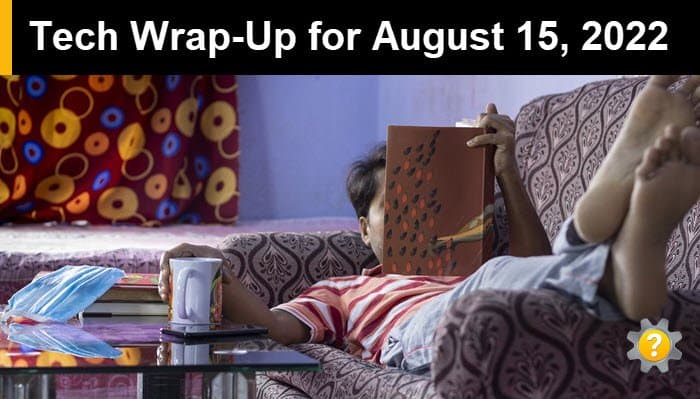 Tech Wrap-Up 8-15-2022, which is Relaxation Day. Breathe in. Breathe out. Breathe in. Breathe out. There are few better ways to relax than lounging on a couch steeped in a great book accompanied by a favorite beverage. I am not sure which one is more relaxing — the great book or the favorite beverage. As long as you have both, I do not suppose that it matters. While you change into pajama bottoms, Tech Help Knowledgebase wraps up the day with a summary of today’s most engaging stories from our social media feeds. We order the story summaries below by user engagement (posts with the most likes, shares, clicks, hashtag clicks, and detail expands) and by the number of impressions received. Our human-curated social media feeds include links to technology news, how-to and help articles, and video tutorials for common issues.

1. GitHub update will help you squash the hidden security bugs in your code (TechRadar)

3. How to create a table of contents in Google Docs (Android Police)

Not so fast. Linux 6.0 has arrived, but only in the form of the first release candidate. Linux creator Linus Torvalds decided to roll the major number from 5 to 6 because he is “starting to worry about getting confused by big numbers again.” The change from 5 to 6 does not necessarily mean anything special about this release. There are over 13,500 non-merge commits and over 800 merged commits. Per Torvalds, most improvements are to the GPU, networking, and sound.

5. Zoom’s latest update on Mac includes a fix for a dangerous security flaw (The Verge)

A Zoom bug could allow a hacker to take control of your Mac. Zoom fixed the bug in its 5.11.5 release of the Mac app. To update Zoom on your Mac, launch Zoom, hit zoom.us from the menu bar, then click Check for updates.

If you are fortunate enough to have a Google Pixel phone, Android 13 and the August security patch became available today. As of the writing of this piece, I have not received the updates yet. Android 13 arrived much earlier than Android 12, which launched in October 2021.