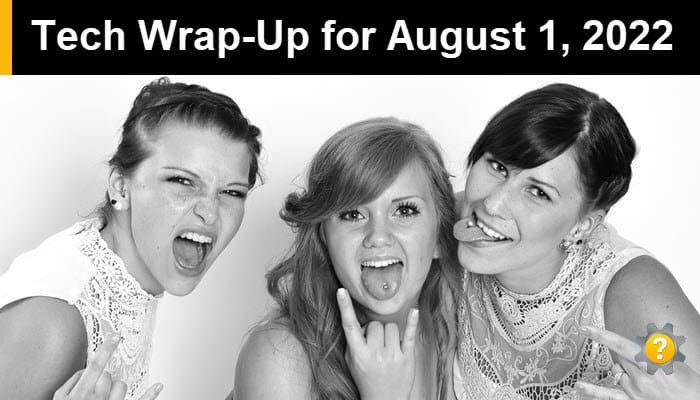 Tech Wrap-Up 8-1-2022, which is Girlfriend Day. Sorry, sweetness. No hard feelings. This particular girlfriend day is not about you and me. It is about you and your girl pals. Have fun, be nice, and please do not wake me up when you get home. While you figure out what to wear for girls’ night out, Tech Help Knowledgebase wraps up the day with a summary of today’s most engaging stories from our social media feeds. We order the story summaries below by user engagement (posts with the most likes, shares, clicks, hashtag clicks, and detail expands) and by the number of impressions received. Our human-curated social media feeds include links to technology news, how-to and help articles, and video tutorials for common issues.

2. Google Chrome Users Could Soon Be Able to Pay With Apple Pay on iPhones (Softpedia)

The walled garden is collapsing. Upon the release of iOS 16, Apple may allow iPhone users to use Apple Pay with browsers other than Safari. iOS 16 beta 4 already permits testers to use Apple Pay with a third-party browser like Microsoft Edge. Apple has yet to issue a formal announcement about it, so there is still time for Lucy to pull the football away from Charlie Brown.

3. iOS 16 Hidden Features and Settings You’ll Want to Try On Your iPhone (CNet)

In more iOS 16 news, CNet points out five hidden features and settings coming to Apple’s mobile operating system. Among the features are the ability to password-protect the Hidden album, view and share Wi-Fi passwords, duplicate photo and video removal, pin tabs in Safari, and more. Read the article to find out how.

I do not recall ever using Google Search’s built-in timer. Perhaps I am like most people, which is why Google decided to remove it (at least for now). Fortunately, that thing in your pocket likely has a timer function in the Clock app.

Google suggests in its recently released Android 13 Security Release Notes that September is the month in which Android 13 will have its official unfurling. Neither I nor 9 to 5 Google have much else to say on the matter.

6. Today I learned about an easy way to share files between Mac apps (The Verge)

A shortcut called the proxy icon allows macOS users to drag and drop files between apps right from a window’s title bar. One handy attribute is dragging and dropping a folder or file’s proxy icon into the Terminal app yields the path to the folder or file.