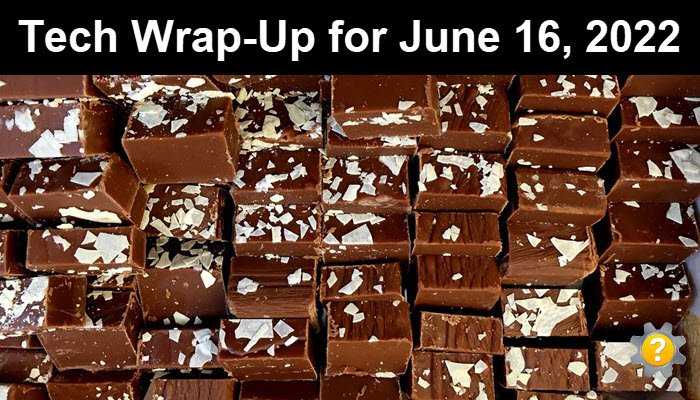 Tech Wrap-Up 6-16-2022, which is National Fudge Day. Fudge is a delectable sugar candy made with butter, sugar, and milk. Throw some semisweet chocolate chips into the mix and you create chocolate fudge. Fudge is a uniquely American treat first concocted in the late 1800s. It became popular because of the relatively inexpensive ingredients and how easy it was to make at home using readily available equipment. While you check the pantry for chocolate, Tech Help Knowledgebase wraps up the day with a summary of today’s most engaging stories from our social media feeds. We order the story summaries below by user engagement (posts with the most likes, shares, clicks, hashtag clicks, and detail expands) and by the number of impressions received. Our human-curated social media feeds include links to technology news, how-to and help articles, and video tutorials for common issues.

Apple touted iOS 16 at its recent Developers Conference. However, no specific mention of what to expect from the iPhone 14 came up. A look into the iOS 16 code provides some clues about what Apple may bring to the latest iPhone. For example, multiple references exist that point to an always-on display (Android already has this feature). The code also suggests that the new Visual Lookup tap-and-lift tool may arrive too. The article also refers to a Pro mode for the Camera app.

3. ChromeOS is set to gain Material You Dynamic Colors (9 to 5 Google)

Android 12 users are familiar with the Dynamic Color system for Material You, where apps and widgets adapt to configured color schemes. ChromeOS may also receive this functionality later this year. It is not clear yet whether ChromeOS users will select a color or, like with Android, adapt to colors from your wallpaper, for example.

The release of a major Windows 11 update is coming soon to a PC near you. Windows 11 version 22H2, the first major feature update to the operating system, should launch in October 2022. This article runs through new features coming to Windows 11 such as Start menu and taskbar improvements, File Explorer changes, Focus and Do not disturb, and lots more.

5. How to keep the Google Drive desktop client from using up your hard drive space (ZDNet)

ZDNet‘s article assumes readers already have the Google Drive Desktop Client (Windows and macOS) installed. No such client exists for Linux. Next, the article distinguishes between streaming files and mirroring files and how that influences the amount of local storage used by your computer. Read through it and see which type best suits your needs.

Writers write and they most often write using Microsoft Word. Microsoft is working on a major update to Word that will let users switch between editing, reviewing, and viewing modes. The wait should be short — Microsoft should release the update in July 2022.