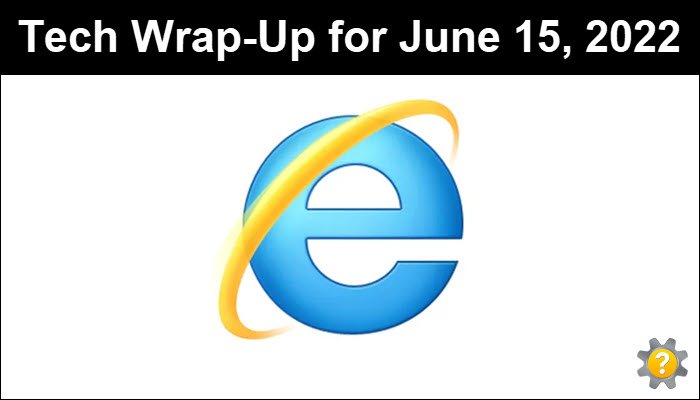 Tech Wrap-Up 6-15-2022, which is the day Microsoft Internet Explorer died and only three months shy of its 27th birthday. How sad. Often referred to as Internet Exploder, there is not one soul alive today who will miss it. A considerable number of “Switch to Microsoft Edge” prompts greet those who launch Internet Exploder today. While you decide which browser to use instead of Internet Exploder, Tech Help Knowledgebase wraps up the day with a summary of today’s most engaging stories from our social media feeds. We order the story summaries below by user engagement (posts with the most likes, shares, clicks, hashtag clicks, and detail expands) and by the number of impressions received. Our human-curated social media feeds include links to technology news, how-to and help articles, and video tutorials for common issues.

The second Tuesday of June fell on June 14 this month, which means yesterday was Patch Tuesday in Microsoftland. Microsoft released 55 security fixes, three of which had a Critical rating. We recommend that Windows users download and install the update at their earliest convenience.

Criticism of Microsoft crescendoed this week for its lack of transparency and slow response time for fixing vulnerabilities. For example, it took Microsoft five months (and two botched patches) before finally patching a critical vulnerability in Azure this week. Microsoft has not notified customers despite the patch.

4. Don’t wait to install the June Windows update — it fixes a major security bug (The Verge)

If you are reading this, stop now and install the June Windows update if you have not already installed it. Hackers are actively exploiting the “Follina” flaw, which allows them to attack a user’s computer through Microsoft Word. Music would play and Felina would whirl.

“Goodbye and good riddance to the most annoying web browser of them all,” pretty much sums it up. As noted previously, today is the day when Microsoft officially ended support for Internet Explorer. Released on August 16, 1995, Microsoft could not wait three months and a day for IE to join the 27 Club (members of the 27 Club include Robert Johnson, Jim Morrison, Janis Joplin, Jimmy Hendrix, and Kurt Cobain, all of whom died at age 27).