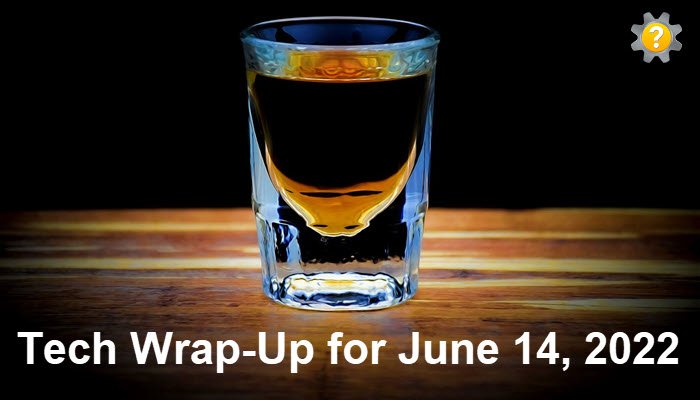 Tech Wrap-Up 6-14-2022, which is National Bourbon Day. I am not usually a fan of excessive or unnecessary punctuation like exclamation points, but I feel that Bourbon Day may be deserving of one. National Bourbon Day! A shot or two of amber goodness tames the average beast. While you fill the ice bucket, Tech Help Knowledgebase wraps up the day with a summary of today’s most engaging stories from our social media feeds. We order the story summaries below by user engagement (posts with the most likes, shares, clicks, hashtag clicks, and detail expands) and by the number of impressions received. Our human-curated social media feeds include links to technology news, how-to and help articles, and video tutorials for common issues.

1. Best antivirus for Android: Protection for your phone or tablet (PC World)

Most popular operating systems include some sort of antivirus protection. They may not afford the best protection, but it is better than nothing. Now think about your smartphone for a minute. How is it protected? Does it even need an antivirus app? This article offers five different options for Android users to protect their devices. Which one is best for your phone?

2. This new Linux malware has a sneaky way of staying hidden (ZDNet)

Speaking of antivirus and malware protection, this new Linux malware, known as Syslogk, is a doozy. It delivers a backdoor that stays hidden on an infected machine until a command and control server sends “magic packets.” Syslogk, at least the version analyzed by Avast, only works on older Linux kernels. That could change at any time as the attackers continue to develop it.

Apple intends to release macOS Ventura to the public this fall, probably in October 2022. The five new features referenced in this article are Continuity Camera, Handoff for FaceTime, Undo Send and Editing for email and text messages, Passkeys, and new Metal 3 tools for gaming. Pop over to Mac Observer to read their descriptions of each new feature. If you are a Mac user, you will be glad you did.

There are lots of buzzwords in the title of this article: vulnerability, Intel, AMD, hackers, encryption. Kudos to the Ars Technica copywriter for nailing an attractive headline. Unfortunately, the Intel and AMD microprocessors did not fare as well. They appear to have a weakness that would allow an attacker to access cryptographic keys.

Microsoft released a security update for Microsoft Edge 102, which also fixes PDF printing issues. We recommend that you update your Microsoft Edge installation as soon as possible.

6. Firefox rolls out Total Cookie Protection by default to all users worldwide (Mozilla)