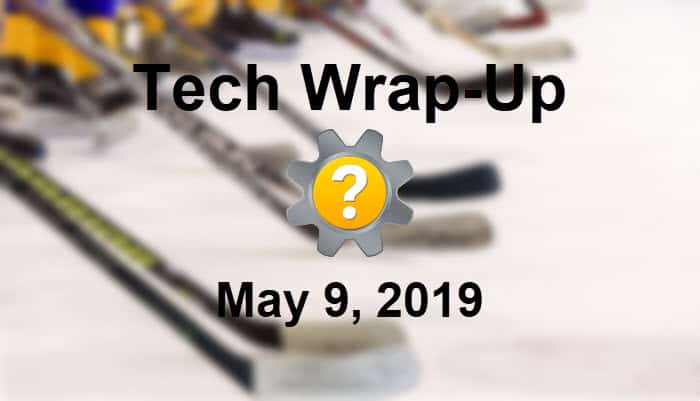 Tech Wrap-Up 5-9-2019. The third round of the NHL Stanley Cup Playoffs kicks off today, where the Boston Bruins and the Carolina Hurricanes meet in the Eastern Conference final. Boston defeated Columbus in the second round, and Carolina was the first team to win four games against the New York Islanders. The Western Conference final starts on Saturday between St. Louis and San Jose. Tech Help Knowledgebase wraps up each day with a summary of today’s most engaging stories from our social media feeds. We order the story summaries below by user engagement (posts with the most likes, shares, clicks, hashtag clicks and detail expands) and by the number of impressions they received. Stories are in descending order with the most engaging story at the top. Our human-curated social media feeds include links to technology news, how-to and help articles, and video tutorials for common issues.

All fingers point toward TypeScript becoming an essential language for developers, according to a report from RedMonk. Released by Microsoft in 2012 as an open-source rendition of JavaScript, TypeScript now ranks as the top programming language today. TypeScript does not replace JavaScript, but compiles to JavaScript, and does not specify data types.

Google updated its Android Distribution Dashboard this week. The latest version of its mobile operating system, Android 9 Pie, reached an installation rate of over 10% of Android devices. More than 2.5 billion devices run Android. Android 8 Oreo had only 4% adoption in the same 9-month time period. Nonetheless, Oreo maintains its lead as the Android version with the highest adoption rate. That may change as Pixel 3a and Pixel 3a XL phones come to market with Android 9 Pie installed.

This week during the I/O developer conference, Google announced new privacy measures for its Chrome web browser. One of those measures is the ability for users to more easily block third-party tracking cookies. According to Vox, most users don’t change their browser settings or device settings. As such, Chrome users may not even know the tracking cookie setting even exists.

The release of Linux 5.1 this past weekend included a new security feature called the Linux SafeSetID Linux Security Module. The module adds a layer of security when running a Linux build with administrator rights enabled. Also included is the option to use persistent memory as RAM, and a way to update Linux without requiring a reboot.

5. Bitcoin Has Been Trending Higher Since April. What Does It Mean? (Forbes)

The price of one Bitcoin now exceeds USD 6000 and makes up nearly 58% of the market cap of all cryptocurrencies combined (according to CoinMarketCap.com). The market for BTC shrugged off significant news of a recent theft of Bitcoin from Binance, the world’s largest cryptocurrency exchange. Those interviewed for the Forbes piece point to strong fundamentals creating a bullish trend.

More news from Google’s I/O developer conference this week concerned Portals, a new way to navigate inside embedded content. Portals are an upgrade to iframes and require a new HTML tag. The content embedded using Portals could pre-load making access to it that much faster. Google thinks it is a better user experience for transitioning between web pages that could ultimately replace iframes altogether.