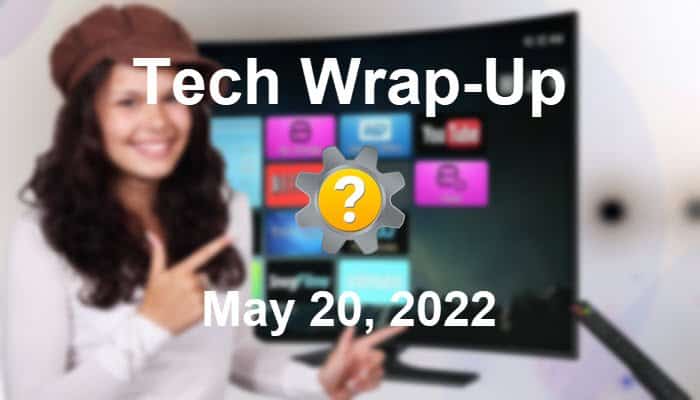 Tech Wrap-Up 5-20-2022, which is National Streaming Day. Let’s be honest with each other here. Isn’t every day pretty much streaming day? When was the last day you didn’t stream something? Yes, that’s what I thought. Me, too. Roku started Streaming Day back in 2014 to celebrate the anniversary of their first streaming device. While you binge-watch something, Tech Help Knowledgebase wraps up the day with a summary of today’s most engaging stories from our social media feeds. We order the story summaries below by user engagement (posts with the most likes, shares, clicks, hashtag clicks, and detail expands) and by the number of impressions received. Our human-curated social media feeds include links to technology news, how-to and help articles, and video tutorials for common issues.

1. FBI and NSA say: Stop doing these 10 things that let the hackers in (ZDNet)

As one might expect, hackers attack unpatched software vulnerabilities. What one may not expect is that hackers also target security misconfigurations to gain access to systems. To thwart unwanted access, key government agencies created a to-do list. The list includes items like enabling multi-factor authentication, keeping software up to date, using strong passwords, and using a VPN.

The advent of quantum computing brings with it a massive increase in computing power. The increase in computing power also represents a threat to cryptographic systems. Enter QuSecure, an innovator in post-quantum cybersecurity (PQC). QuSecure recently introduced QuProtect, the industry’s first end-to-end PQC software-based solution uniquely designed to protect encrypted communications and data. Protections extend to all systems and devices.

I have a Pixel 6 Pro that I love for many reasons. The camera is a major reason I opted for the Pixel 6 Pro. The camera is great, and the camera features are even better. Magic Eraser is an incredible feature. It works much better than I expected after watching a few demos. I couldn’t wait to try it myself, and it was pretty much the first thing I tried when I first received my phone. I highly recommend it.

5. Mozilla shares how it plans to implement Manifest V3 in Firefox (XDA Developers)

Despite some of the controversial changes made to Manifest V3, Mozilla plans to implement the web extension platform in Firefox. However, Mozilla plans on using a different approach than used in Google Chrome. For example, Firefox will retain support for blocking WebRequest while maintaining support for Declarative Net Request. Manifest V3 makes extensions more secure, faster, and more private.

Microsoft is building what it calls the “Turing Image Super Resolution engine” into Microsoft Edge, the default Windows web browser. The new engine uses AI to upscale low-res images into high-res images to make images sharper when viewed in Edge. This article from PC World includes some images that show the difference between an original image and an upscaled image. It is worth checking out.