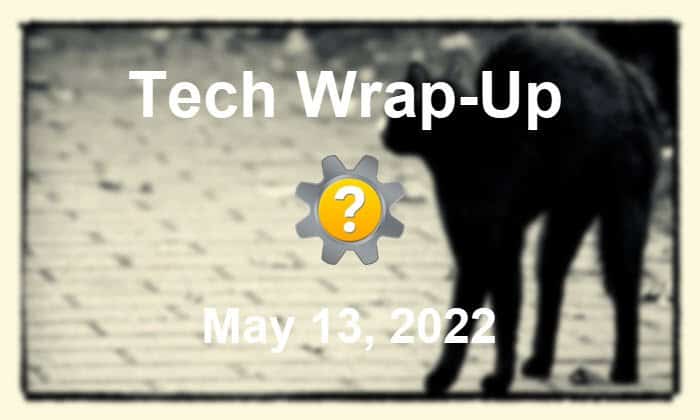 Tech Wrap-Up 5-13-2022, which is Friday the 13th. People viewed Friday the 13th as a very unlucky day before we all began associating it with a movie franchise. Still, today is not the day to allow a black cat to cross your path, walk under a ladder, or break a mirror. While you are walking on eggshells, Tech Help Knowledgebase wraps up the day with a summary of today’s most engaging stories from our social media feeds. We order the story summaries below by user engagement (posts with the most likes, shares, clicks, hashtag clicks, and detail expands) and by the number of impressions received. Our human-curated social media feeds include links to technology news, how-to and help articles, and video tutorials for common issues.

1. Programming languages: Python is slow, but it’s about to get faster (ZDNet)

Python 3.11 is the culmination of a multi-year effort to bring speed to the programming language. It is due, in part, to Microsoft’s funding of a Python Software Foundation project to make Python two times faster. To do so, Microsoft hired Guido van Rossum, Python’s creator, who chose to work on Python’s lack of performance. Preliminary results show that Python 3.11 is 1.25 times faster than 3.10.

2. What Terra’s Collapse Teaches about ‘Crypto’ and Bitcoin (Bitcoin Magazine)

Play stupid games, and win stupid prizes. That seems to be the case with Terra/LUNA, a now-worthless shitcoin. First of all, a centralized entity called Terraforms Labs had the ability to halt the production of new blocks yesterday. That should be a red flag in itself. A May 12 tweet from Terra put it this way: “Terra validators have decided to halt the Terra chain to prevent governance attacks following severe $LUNA inflation and a significantly reduced cost of attack.” This is my opinion, of course. Please do your own research.

3. With its Pixel Watch and tablet, Google is getting serious about its own ecosystem (The Verge)

I have been looking forward to a Pixel watch since Google acquired FitBit. This whole time, I wondered if Fitbit would adopt WearOS, or if Pixel Watch would adopt Fitbit OS. Either way, Pixel fans — myself included — eagerly await the Pixel Watch later in 2022. I personally have very little use for a tablet, so I am not as excited about the Pixel Tablet.

The deciding factor about which devices support iOS/iPadOS 16 is memory. For example, upon the release of iOS 13, Apple dropped support for devices with less than 2GB of memory (iPhone 5S, 6, 6 Plus, iPad Air, mini 2 and 3, and the 6th gen iPod touch). If iOS requires at least 3GB of memory, that could spell the end of support for the nine devices with A9 and A10 Fusion chips.

The Edge VPN stories keep rolling in this week, and our users keep interacting with them enough to make the wrap-up. When enabled, Microsoft Edge Secure Network encrypts your data and masks your IP address. Microsoft’s free VPN service offers 1GB of free bandwidth per month, an amount that renews automatically.

At a summit meeting yesterday, Amazon, Ericsson, Google, Intel, Microsoft, and VMWare, came together to pledge an initial $30M towards the implementation of an open-source and software supply chain mobilization plan ($150M over 2 years).