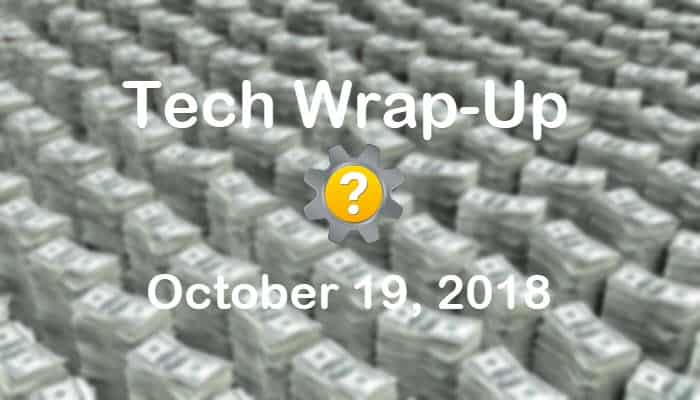 Tech Wrap-Up 10-19-2018, the day in which the Mega Millions lottery prize reached $1 billion. We wrap up each day with a summary of today’s most engaging stories from the Tech Help Knowledgebase social media feeds. We order the story summaries below by user engagement (posts with the most likes, shares, clicks, hashtag clicks and detail expands) and by the number of impressions they received. Stories are in descending order with the most engaging story at the top. Our human-curated social media feeds include links to technology news, how-to and help articles, and video tutorials for common issues.

Microsoft issued a quality improvement release for Windows 10 Creators Update (1703) today. The update is not known to contain security fixes since those are normally included as part of regular Patch Tuesday updates. Although the changelog is lengthy, the article calls out that the update fixes an issue known to exist on systems with more than 4GB of memory in particular.

3. Bitcoin And Blockchain Jobs In The U.S. Are Surging (Forbes)

Crypto job market growth this year points to how companies are taking the new technology seriously despite a bear market. According to research from Glassdoor, crypto-related jobs more than tripled since the beginning of the year. Two companies account for the almost 25% of the growth — ConsenSys and IBM. The average pay for the jobs — nearly $85,000 per year — is 62% higher than the country’s median base pay.

4. Chrome 70 brings picture-in-picture support to Windows and Mac (The Verge)

Already a component of Android since the release of Oreo, Chrome 70 now extends picture-in-picture functionality to desktop operating systems (Windows, Mac, and Linux). To try it out, watch a YouTube video, double right-click in the video, and choose Picture in picture from the menu.

A new version of Windows 10 due for release next year includes the option to uninstall Microsoft bloatware apps. If you don’t use preinstalled apps like Groove Music, Paint 3D, Snip & Sketch, Sticky Notes, and other, it will be easier to remove them from your system. However, don’t expect the same for Edge, Windows 10’s default browser. You’re likely stuck with it even if you don’t use it.

6. 100 Websites That Shaped the Internet as We Know It (Gizmodo)

Gizmodo compiled a list of 100 websites it thinks are the most significant of all time. They describe their list as, “an appreciation of the places that still make the web worth surfing.” The oldest site on the list is the Electric Frontier Foundation (1990) coming in at number 88. The newest sites making the list are Giphy, The Toast, and HaveIBeenPwned, all from 2013.

The power of Linux apps will soon come to Chrome OS. When it does, you will see apps like Linux virtual machine in Chrome OS’s Task Manager. Also, folder sharing will let Linux apps read and write files from specified Chrome OS folders.