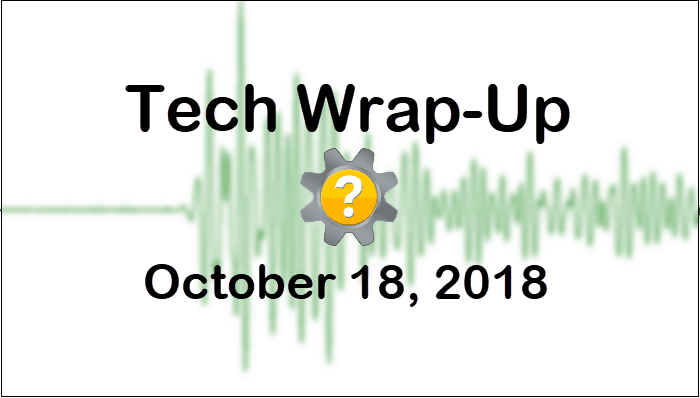 Tech Wrap-Up 10-18-2018, which is The Great Shakeout day for earthquake drills. Drop! Cover! Hold on! We wrap up each day with a summary of today’s most engaging stories from the Tech Help Knowledgebase social media feeds. We order the story summaries below by user engagement (posts with the most likes, shares, clicks, hashtag clicks and detail expands) and by the number of impressions they received. Stories are in descending order with the most engaging story at the top. Our human-curated social media feeds include links to technology news, how-to and help articles, and video tutorials for common issues.

1. Future-proofing the internet: Quantum computers will break the encryption that protects the internet (The Economist)

Future-proofing the internet against quantum computers means steady work ahead in cryptography. But what is the date in which to complete such work? IBM built the first rudimentary quantum computer in 2001, and there have been steady advances in the technology since then. Applications for quantum computing power reside in the emerging artificial intelligence field and other fields like chemistry. The article compares the challenges ahead in “quantum-proofing” the internet to the manner used to overcome the millennium bug in 2000.

2. Civil, a blockchain-media startup, cancels its ICO, offering a full refund to those who bought tokens (Fortune Magazine)

Blockchain start-up, Civil, envisioned a new world for journalism that combined a publishing tool for journalists with a direct funding resource in readers. An ERC-20 token by the same name (symbol CVL) was to serve as the intermediary between readers and content. After coming up very short in their token sale, Civil announced Tuesday its cancellation of the sale and a full refund of contributions. According to Civil, all is not lost because, “a new, much simpler token sale is in the works.”

3. Microsoft points to a golden future where you can make Windows 10 your own (The Register)

At some point next year, Windows 10 users will have the option to more easily uninstall some pre-installed Windows apps. Included are apps like Groove Music, Paint 3D, Snip & Sketch, Sticky Notes, and more common apps like Calculator and Calendar. Don’t expect Edge browser to receive the same treatment.

Apple may abandon Intel chips in its Mac computers as early as 2020 or 2021, according to an Apple analyst. What may replace them are the A-series chips found in iPhones and iPads today. Much like with its mobile devices, the change to ARM-based processors would give Apple complete control over hardware and software in Macs. Not only control of hardware but a move away from Intel’s launch schedule and potential supply constraints.

Progressive Web Apps (PWAs) are websites that Windows 10 users download as apps from the Microsoft Store. They behave like regular desktop apps. PWAs offer a more native experience without any browser clutter like buttons, tabs, address bar, etc. Although support for PWAs in Chrome exists on Chrome OS, the release of Chrome 70 brings support to Windows 10 for the first time. Previously, Windows 10 users browsed the Microsoft Store for PWAs to add to Edge browser. Look for Chrome PWA support on Mac and Linux in Chrome 72 this coming December.

Apple announced today a new event to take place in New York City. Last month, Apple’s event introduced the world to iPhone XS and Apple Watch 4. Speculation is that Apple will focus attention on new iPad and Mac models this time around.

7. Cortana’s iOS and Android apps are getting a massive redesign (The Verge)

An updated voice assistant UI and support for music and podcasts on phones and Bluetooth devices are part of Cortana’s new design for iOS and Android. Improved integration with other Microsoft services and features like calendar, reminders, meetings, and Skype Teams is also coming. The update is in beta.