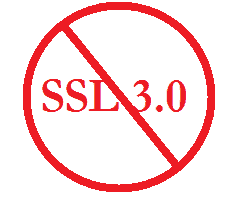 A vulnerability in the SSLv3 communication protocol (SSL 3.0) has been disclosed, that allows a man-in-the-middle attack on HTTPS connections.  The SSLv3 protocol vulnerability is known as POODLE, which stands for Padding Oracle On Downgraded Legacy Encryption, and was developed and disclosed by researchers at Google.  According to an article appearing on Kaspersky Labs’  ThreatPost website:

The attack is known as POODLE and was developed by several researchers at Google, including Thai Duong, who was part of the duo who developed the BEAST and CRIME attacks several years ago. The technique takes advantage of the fact that when a secure connection attempt fails, servers will fall back to older protocols, such as SSLv3, in an attempt to communicate securely with the remote client. An attacker who can trigger a connection failure can then force the use of SSLv3 and attempt the new attack.

Disabling SSL 3.0 support, or CBC-mode ciphers with SSL 3.0, is sufficient to mitigate this issue, but presents significant compatibility problems, even today.