Google Chrome’s plug-in support page for Adobe Flash Player states, “If you’ve previously installed Adobe Flash Player separately, you’ll see two files listed for the plug-in. If both are listed as enabled, the version bundled with Chrome will be used.”

However, it appears that Chrome may not always know which Flash version to consistently use, causing Chrome to slow down,  hang, and eventually crash. A solution is to disable one of the versions of Adobe Flash Player. First, check to see if Google Chrome has two version of Flash enabled. To do so, visit Chrome’s Plug-in page by typing chrome://plugins in the Chrome’s address bar (the same place where you type a web address/URL):

Scroll down the list of plug-ins and look for the plug-in called Adobe Flash Player. You will know Chrome is potentially using both the integrated version of Flash and the system version of Flash if you see 2 files: 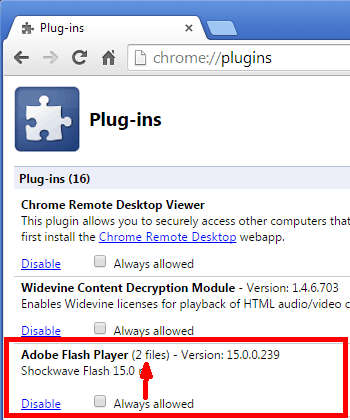 At the top right of the Plug-ins page, click the +Details link to display the details for each plug-in. The details for Adobe Flash Player should now display as: 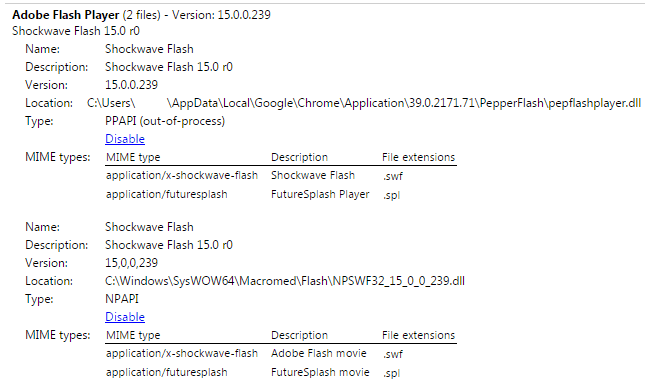 As depicted above, each of the 2 Adobe Flash Player files is enabled (since each of them have a link to Disable it). This is the potential source of the plug-in has crashed error (or the plug-in is unresponsive error). To help prevent this error from recurring, you may disable either of the Adobe Flash Player plug-ins by clicking the Disable link: 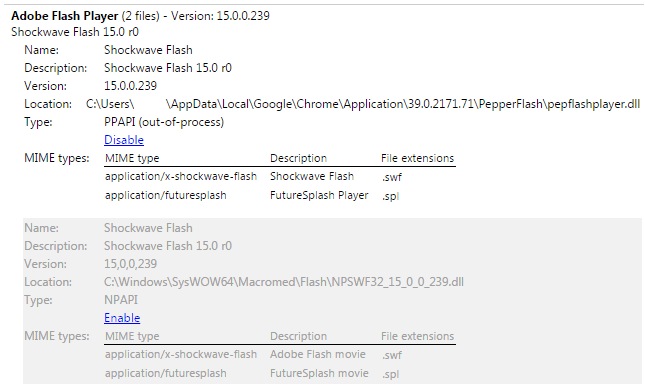 In our case, as shown in the above image, we decided to disable the system version of Flash, and leave Chrome’s integrated version enabled. You can tell which of the files is the Flash version integrated into Chrome based on its listed Location:  it is located on your computer under the …\AppData\Local\Google\Chrome\ directory.

Please leave a comment below if you were able to overcome the Plug-in has crashed Shockwave Flash message! If this article helped you, please consider leaving us a Bitcoin tip: