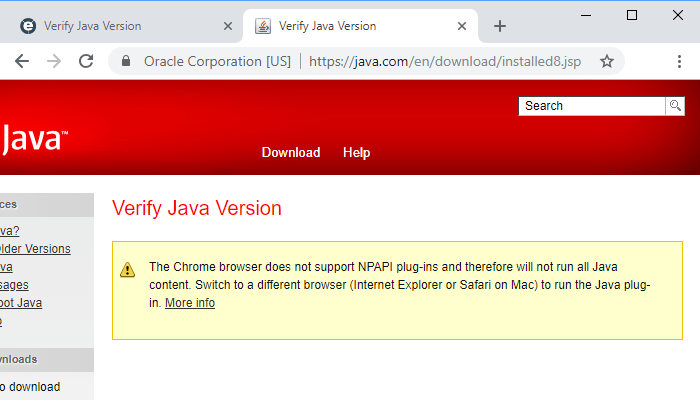 With waning support for internet artifacts like the Java browser plugin, some users might be stuck with the need to run legacy apps that require it. The options to run Java apps are few and far between these days. Yet it is still possible to use the world’s most popular web browser to run the world’s most reviled plugin. The two don’t play very well together, so Java support in Google Chrome requires a simple intermediary.

Google embarked on its path to rid Chrome of NPAPI plugins like Java back in September 2013. Linux users lost Java support first when Google released Chrome 35 in April 2014, pushing them to alternative browsers like Firefox. Soon thereafter, Google no longer displayed existing NPAPI-based apps and extensions in the Chrome Web Store. By April 2015, Chrome 42 disabled Java by default, and then Chrome 44 removed the best workaround available at the time in November that same year. The Chrome Web Store unpublished apps and extensions that required NPAPI plugins and that was that.

One method to use Java in Google Chrome is to install the IE Tab extension. The “IE” in IE Tab is an abbreviation for Internet Explorer. Available for Chrome from the Chrome Web Store, IE Tab emulates Internet Explorer within a Chrome browser window. The extension uses the Internet Explorer rendering engine to display Java content (as well as ActiveX and Silverlight content). It is easy to install, and even easier to use. It is important to note that IE Tab works on Windows only.

Visit the IE Tab page in the Chrome Web Store. Click the blue Add To Chrome

button. A dialog will display asking you if you want to Add IE Tab, accompanied by a list of functions it can perform. Click the Add extension button.

Once installed, the IE Tab icon

displays next to Chrome’s address bar. Click the icon to open an IE Tab. In the IE Tab, input the web address of a page that contains Java content. In the example below, our Java version verification was successful. The page uses a Java detection applet, with the latest version of Google Chrome using an IE Tab.

Try that same verification process in a regular Google Chrome tab, and a notification that Chrome does not support NPAPI plugins displays instead.

If you have the Java plugin on your Windows machine, then you have Java Web Start (JWS). The question is does the Java application you want to run use JWS technology? JWS launches automatically if you download a Java app that uses it (usually in the form of a .jnlp file). Check the Java app developer’s website to see if they have a JWS download link for their app. If they do, download it and save a shortcut on your desktop when prompted by JWS. Double-click the shortcut to run the app.

Also included with JWS is a Java Cache Viewer. Use Cache Viewer to launch applications you have already downloaded. Here’s how:

2. Under the General tab, click the View button in the Temporary Internet Files section to launch the Java Cache Viewer in a separate window.

3. Double-click an application listed in the Java Cache Viewer to launch it without needing a web browser.

If the Java app you want to use is not listed or does not launch when double-clicked, contact the app’s developer.

Thank you for visiting Tech Help Knowledgebase to learn about Java support in Google Chrome.