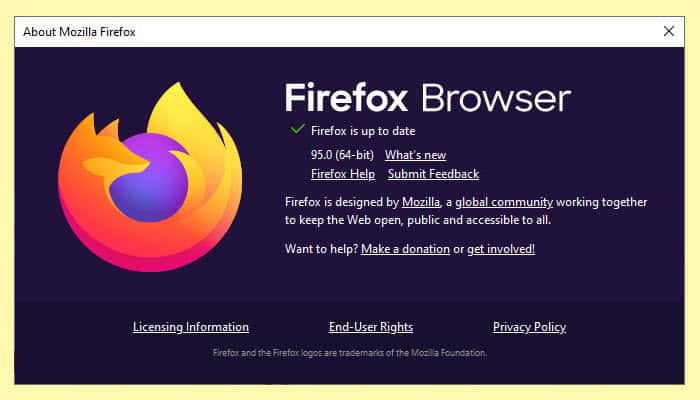 Firefox 95 released today by Mozilla for Linux, macOS, and Windows. The release includes RLBox, a new security sandboxing technology. Mozilla researchers developed RLBox, in collaboration with the University of California San Diego and the University of Texas, to make it easy and efficient to isolate subcomponents by using WebAssembly to isolate potentially-buggy code. This serves to make Firefox more secure.

With the release of Firefox 95, Mozilla isolates five different modules — Graphite, Hunspell, Ogg, Expat, and Woff2 — and treats the modules as untrusted code. In doing so, if any of the isolated modules experiences a problem, it will not pose a threat to Firefox as a whole. You can read more details about RLBox on Mozilla’s Hacks blog.

Firefox 95 includes 14 security fixes, 7 of which have a High impact rating. Users should update Firefox as soon as possible.

Also in this release, Mozilla reduced CPU usage on macOS in Firefox and WindowServer during event processing. They have also reduced the power usage of software decoded video on macOS, especially in fullscreen. This includes streaming sites such as Netflix and Amazon Prime Video.

Finally, to better protect Firefox users against side-channel attacks such as Spectre, Site Isolation is now enabled for all Firefox 95 users.

Thank you for visiting Tech Help Knowledgebase for information about Firefox 95 released.