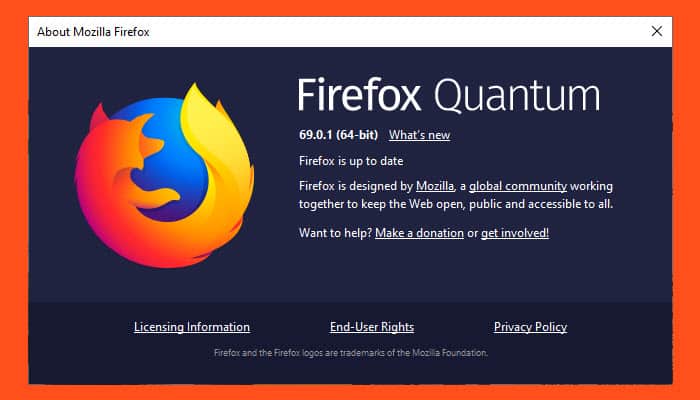 Mozilla released Firefox 69.0.1 on September 18, 2019, fixing a bug that caused external programs to launch in the background when clicking a link. Also fixed was an Add-on Manager usability issue that impacted users with screen readers like JAWS. Firefox is a free web browser application developed by the Mozilla Foundation. It installs on desktop and laptop computers running Windows, macOS and Linux operating systems. Mobile Firefox versions exist for both Android and iOS devices. We recommend updating your Firefox installation as soon as possible.

Firefox 69.0.1 fixes one moderate security flaw reported by Johann Hofmann, a Firefox developer at Mozilla. The flaw, CVE-2019-11754, could allow a malicious website to hijack the mouse pointer and confuse users when a website enables the pointer lock though requestPointerLock(). To review the full list of bug fixes, please see the release notes.

Firefox is highly customizable with thousands of extensions, themes, and a drag-and-drop toolbar. With a Firefox account, users have the option to sync settings, passwords, and bookmarks across all of their devices. Multi-account containers are unique to Firefox so users can separate their personal, work and shopping browsing without the need to log out of accounts or switch browsers. With up to 30% less memory usage than Chrome, Firefox is very fast.

Thank you for visiting Tech Help Knowledgebase to learn about the release of Firefox 69.0.1.