If you held Bitcoin (BTC) in a Bitcoin Core software wallet before the Bitcoin blockchain fork on August 1, 2017, you now also possess an equal quantity of Bitcoin Cash (BCH). In this post, we will show you how to claim it.

Do not skip this step. Under the File menu, click Backup Wallet. Save the wallet.dat file to a location or device other than where you have installed Bitcoin Core. The wallet.dat file contains your Bitcoin private keys.

Visit the Bitcoin ABC website. You can verify the website’s link by visiting the official BitcoinCash.org website and following the Bitcoin ABC link under Wallets. It is always worth the extra due diligence to avoid scam websites.

Click the Latest stable release: 0.16.0 link. Choose the directory for the most recent version, then choose the directory for your operating system (Linux, OSX, or Windows). Click the link for your preferred download. For this tutorial, we downloaded bitcoin-0.14.6-win64.zip (which was the latest version available when this tutorial was originally written) to a Windows 10 64-bit computer that did not have a Bitcoin Core wallet installed.

Next, unzip the download, navigate to the bin folder, and double-click bitcoin-qt.exe to launch Bitcoin ABC. When launched for the first time, you can choose where Bitcoin ABC will store its data. Although the default folder in the path is Bitcoin, we selected to Use a custom data directory and called it BitcoinABC: C:\Users\User\AppData\Roaming\BitcoinABC\ 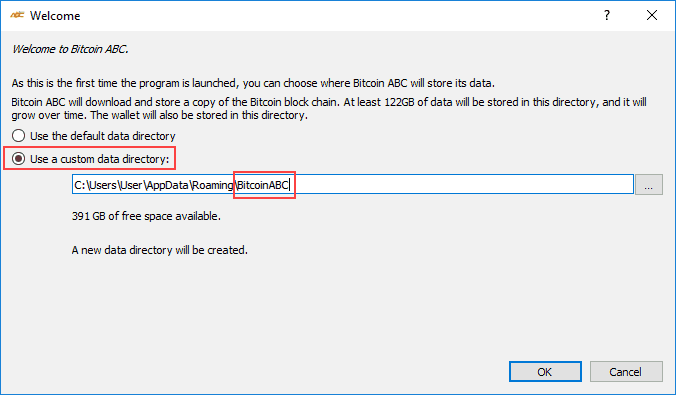 Step 3. Wait for the Bitcoin ABC wallet to synchronize 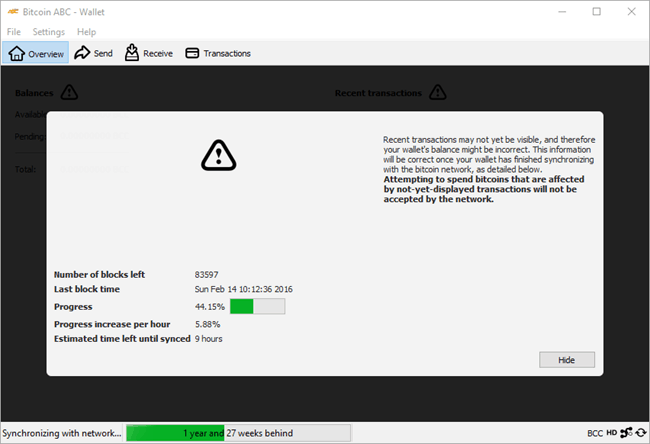 As a full node wallet, Bitcoin ABC will download the entire Bitcoin/Bitcoin Cash blockchain. The amount of time will vary. Plan on waiting up to 24 hours for Bitcoin ABC to synchronize with the Bitcoin Cash network. Do not proceed to Step 4 until Bitcoin ABC has fully synchronized.